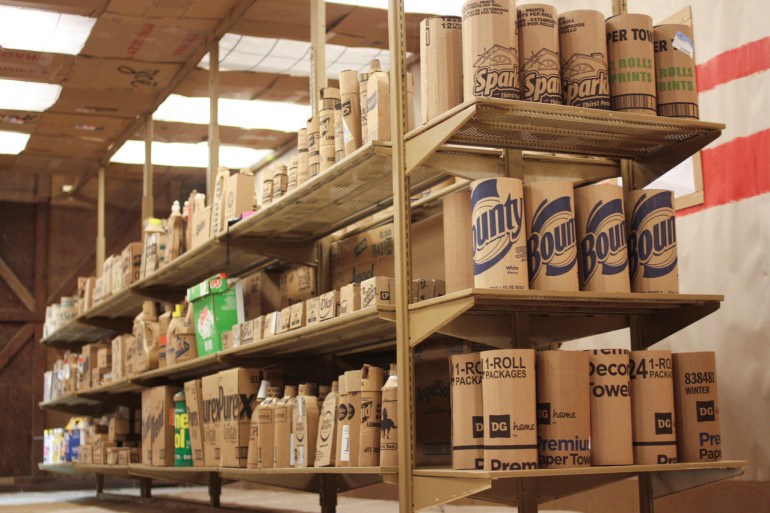 Family Dollar General Tree grew out of project I started after our move to New Orleans in 2010. The original project, titled Wreck (http://www.flickr.com/photos/bobsnead/sets/72157625864777981/), was a recreation of a car accident I witnessed on my first days in the city and it became a metaphor for our move-feeling as if we’d crashed landed with no clear plan. While developing the installation with the cardboard boxes we used for the move, I became obsessed with the corporate branding that covered the exteriors. Because of a prevalence of Dollar Stores in my neighborhood, I began collecting and building from their cardboard refuse with the goal of creating a closed circuit infinite loop of Uroboros, where the trash of Dollar Stores goes back into the production of a Dollar Store. The project cynically comments on the illusion of infinite resources that box stores project, while also wholeheartedly embracing the forms that shape our domestic life with meticulously handcrafted products.

Bob Snead is a native of Charleston, SC where he graduated Cum Laude in 2002 from the College of Charleston with a BA in Studio Art (2011 he was named a distinguished alumnus). Soon after graduating, he helped found Redux Contemporary Art Center in Charleston and remained founding director of the organization until 2005 when he left to pursue graduate studies at Yale University School of Art. After receiving his MFA in painting and printmaking in 2007, he helped form the traveling artist collective Transit Antenna (http://transitantenna.com) and spent the next two years developing community-based art projects across North America. He has exhibited with Jack Tilton Gallery and Deitch Projects in New York, and he currently lives and works in New Orleans where he is faculty at Loyola University, managing member of the visual & literary art collective Press Street (press-street.org), and the 2013 director of the Hand in Glove conference (hand-in-glove.org).