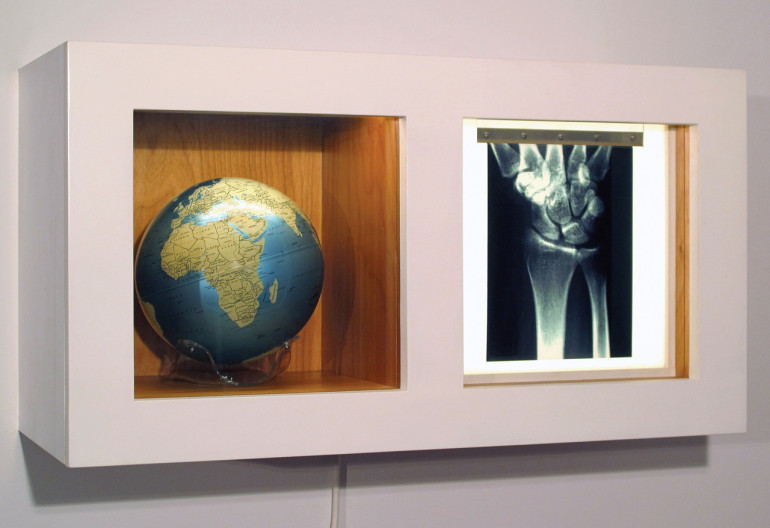 My practice as a visual artist evolves from the conditions of irony and paradox. The framework of Hegel’s theory of the dialectic influences me where thesis, in proximity to antithesis, leads to synthesis. “”Geneva”” is a synthesis of the political and poetic; two seemingly disparate locations merged into one.
“”Geneva”” is one of several works from a series entitled “”Mantra’s for the New Millennium”” which seizes on common, often over-used catch phrases used in our public news media. In the “”Mantra’s for the New Millennium”” series the visual takes the place of the written/spoken so that a new, yet problematic, relationship is formed.
These common phrases are cleverly transformed into Rebus puzzles or pictograms so that they are visually “”read”” from left to right, very much like a written sentence structure. In “”Geneva”” the political becomes poetic in an intersection of oppositions.

Originally from East St. Louis, Illinois, David Detrich received his Bachelor of Fine Arts degree from the Kansas City Art Institute in Missouri and his Master of Fine Arts degree from Alfred University in New York. His teachers included Ken Fergerson, Dale Eldred, Jim Leedy, Tony Hepburn and Wanye Higby. He has exhibited his sculptural works nationally and internationally including venues at the Tallina Kunstiulikool in Tallin, Estonia and at the American Cultural Center in Taipei, Taiwan. His work is also represented in public and private collections nationally. Outside of the field of art he has consulted with the United Nations Industrial Development Organization (UNIDO) through the Government of Jamaica and was involved in several architectural collaborations with architect Robert Miller, namely with Nexus Press in Atlanta, Georgia. Before his academic appointment at Clemson University he served on the faculties at Wichita State University and Alfred University.

All the Tears I Missed

I See You Too

Para Seguir Hay que Sufrir (To Continue We Must Suffer)

Au seuil de l'Oubli (At the Threshold of Forgetfulness)