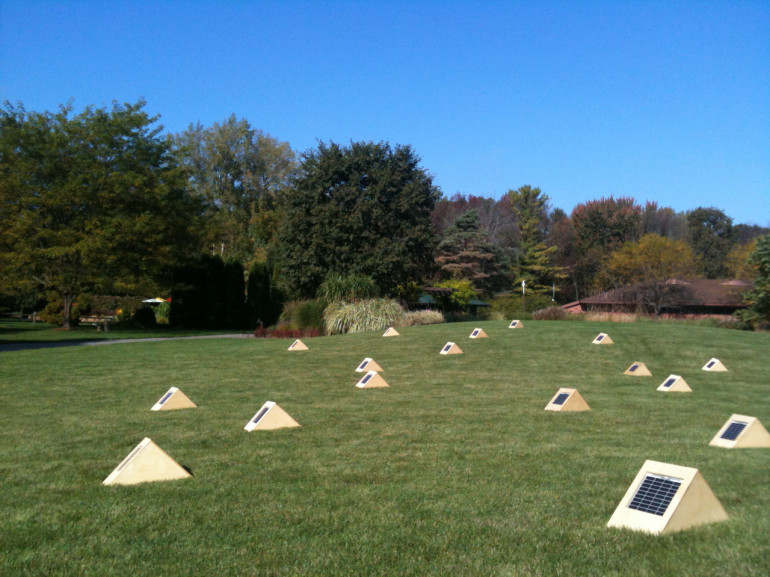 Sun Boxes is an environment for one to enter and exit. It’s a system that improvises with Mother Nature. The sound of Sun Boxes is loud enough to engulf the listener but there is also enough space for ambient sounds of the environment to enter the mix such as; birds, traffic, wind, waves… It’s the perfect combination of technology and nature that create art, an environment.
Participants are encouraged to walk amongst the speakers, and surround themselves with the piece. Allowing the audience to move around the piece will create a unique experience for everyone. Sun Boxes is not just one composition, but, many. There are no batteries involved, so Sun Boxes is reliant on the sun. Clouds, participants and various amounts of sunlight all contribute to the consistent evolution of the piece.

guitar and some inspiration from the Punk Rock movement of the 1980âs he began to write his own music. By the 1990âs he was in touring bands and started his own record company. After touring the United States tirelessly Colorusso found himself in one too many bars, his music began to expand and incorporate composition and improvisation. He began to play bass clarinet and clarinet. This expansion caused his music to evolve, resulting in the pieces Tagmusik (24 hour performance in Bethel CT) and Maschine (a composition for instruments and off-set printing presses.) Slowly, these explorations extended beyond music and investigated light and sculpture. First with MB 89 and then with CUBEMUSIC, both of which have toured the US. In the last decade Colorusso has combined his interests to create his latest work Sun Boxes which premiered June 2009 as part of the exhibition âoff the Gridâ at the Goldwell Museum in NV.

Just One Of My Many Honors

Are You Sleeping? Are You Awake?