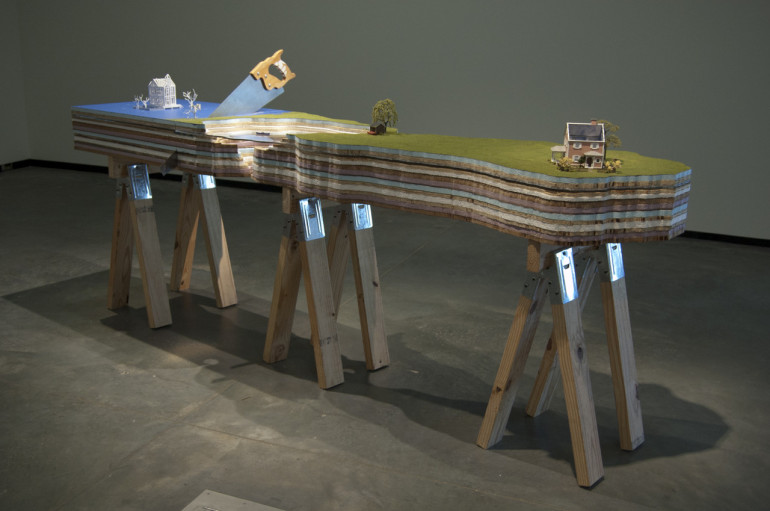 As animals, we possess the impulse to find a sense of familiarity, “of home,” wherever life has taken us. This yearning for a place to belong emphasizes the importance of longing. Though we may not always find what we’re looking for, though we may never again come across “home,” the fulfillment of that desire isn’t what’s crucial. It’s the desire itself. My artwork arises from a displacement of home. No longer a physical place, it now exists in my heart and memories. “Change of Heart” explores the uncertainty of a future and how quickly one small decision can completely alter one’s intended plan. Leaving the hereafter vacant, one may utilize their past experiences to explore an alternative outcome. Through the exploration of storytelling and ethology, I construct moments of anxiety and fear that collide with a world of ambiguous subconsciousness that reflects a journey to discover home once again.

Stacey M. Holloway received her MFA from the University of Minnesota in 2009, her BFA from Herron School of Art and Design/IUPUI in 2006, and recently, became a Visiting Assistant Professor of Sculpture at the University of Alabama at Birmingham in 2013. From 2009 to 2013, Holloway was employed by Herron School of Art and Design as their Sculpture Technician and Instructor of Sculpture, 3D Design, and Sculpture Foundry Methods. Holloway has exhibited throughout the Midwest, South and East Coast in galleries such as FM Gallery, Chicago, IL; Gallery 924 at the Arts Council of Indianapolis, IN; Edington Gallery in Three Oaks, MI; the Huntsville Museum of Art in Alabama; and Trestle Gallery in Brooklyn, NY. She has also received the 2010 Efroymson Contemporary Arts Fellowship through the Central Indiana Community Foundation in Indianapolis, Indiana, and the Juror’s Choice award for the 2014 Red Clay Survey in Huntsville, Alabama.