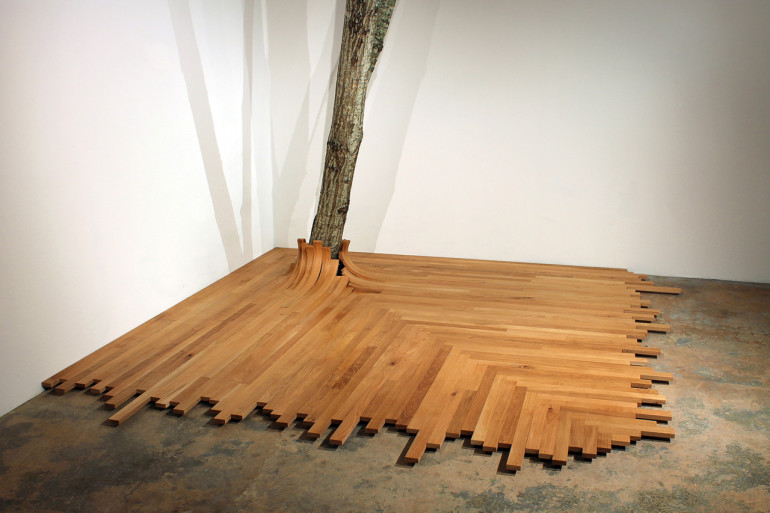 “Seep II” is an installation designed specifically for the ArtFields 2015 exhibition. It will consist of a large oak tree appearing to grow out of a hardwood floor and pass through the ceiling above. I created the first version of this project for the Visual Art Exchange in Raleigh, NC last summer. Their gallery measured 20′ x 20′ and the piece occupied roughly 9′ x 9′ of the corner of that space. For ArtFields, I would like to expand the piece significantly by increasing the footprint to hopefully 20′ x 20′ and have the tree in the center of the floor. The custom hardwood will be laid in a herringbone pattern on all four sides of the tree and stretch out to completely cover the existing floor. The boards closest to the trunk will have been steam-bent and installed to gracefully curl back to make room for and embrace this “growing” tree. As visitors enter the space and circumscribe the large oak tree, they will inevitably be transformed from passive observer into subtle participant.

Jackson Martin was born and raised on a hippie commune in rural Tennessee. At age 8 he moved to Nashville, TN with his family. After high school, he began attending college for fine arts, completing four semesters before dropping out in 1999. He then began walking, hitchhiking and train-hopping extensively throughout the United States. Martin finally retuned to college where earned his BFA from Middle Tennessee State University in 2004. He then moved to Baltimore, MD where he attended the Maryland Institute College of Art, receiving his MFA in 2007. Martin regularly exhibits his sculptures and installations on a national and international level. Venues include Urban Institute for Contemporary Arts, Pratt Institute Sculpture Garden, and Sculpture Key West. He has also participated in artist residencies at the Vermont Studio Center and Godsbanen Cultural Center in Denmark. Martin and his family live in Asheville, NC where he is an Assistant Professor at the University of North Carolina.