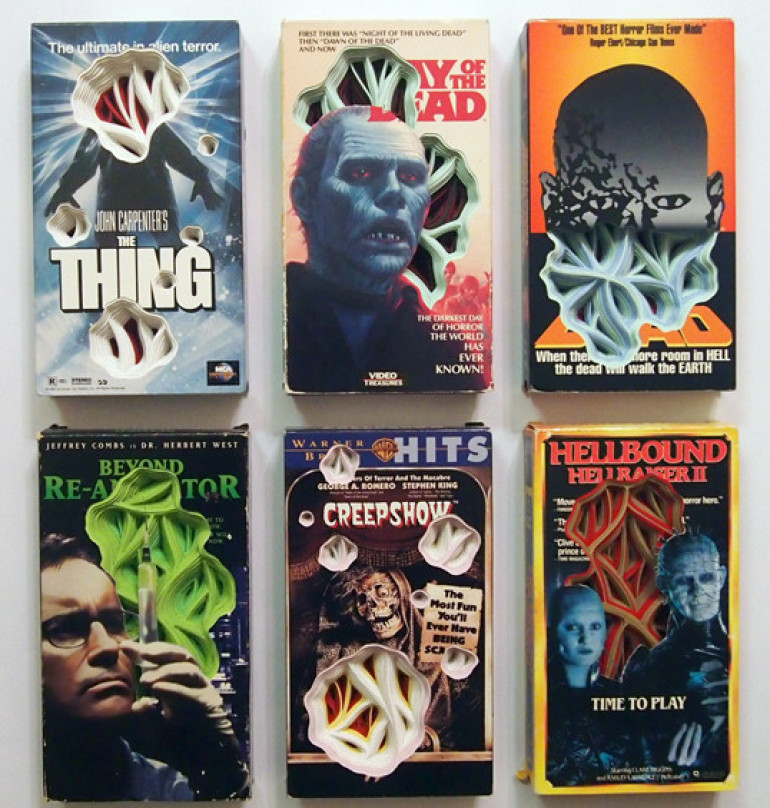 In February of 2013, I lost both my mother and father two weeks apart from each other to smoking-related cancers. It was a devastating time in my life, but I channeled my grief into the conceptual ideas of my work. Cancer is a disease that is a perfectly structured killer; it is beautiful in its architecture but grotesque in its eventuality. I began to think about nostalgia, longing for a childhood I never had, and parents that I needed. My recent work is an exploration of the escapisms I used as a child to escape my everyday reality. I repurpose retro-pop culture VHS from my childhood to re-envision the movies and fiction that became my surrogate parents and allowed me to find order from my chaos, beauty from destruction, and hope for more joyous times.

Charles Clary was born in 1980 in Morristown, Tennessee. He received his BFA in painting with honors from Middle Tennessee State University and his MFA in painting from the Savannah College of Art and Design. He has shown in exhibitions at Pierogi Gallery and Nancy Margolis Gallery in New York, Spoke Art in San Francisco, and in museum shows at Mesa Contemporary Art Museum, Gadsten Museum of Art, and Cornell Museum of Art. Clary has been featured in numerous print and Internet interviews including Colossal, WIRED magazine (US and UK), Hi Fructose, beautifuldecay.com, and Bluecanvas Magazine, as well as a recent feature in American Craft Magazine. He has also been featured in publications including 500 Paper Objects, Paper Works, Paper Art, Papercraft 2, PUSH: Paper, and The New Twenties. Charles has exhibited regionally, nationally, and internationally in numerous solo and group shows, and is represented by Kenise Barnes Fine Art, Diana Lowenstein Gallery, and Patrajdas Contemporary Gallery.