A Blue Throw Down 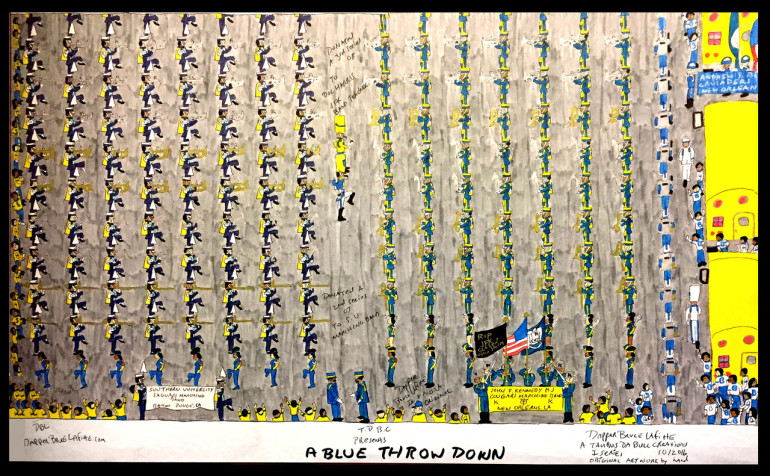 Dapper Bruce Lafitte (formerly Bruce Davenport Jr.) was born Bruce Washington in 1972 at Charity Hospital and grew up in the Lafitte Housing Projects in the 6th Ward. With the encouragement of his grandparents who raised him, he began to draw at the age of five as a means to entertain himself and document the world around him. Throughout his schooling, he was exposed to and intrigued by the junior high and high school marching band culture-a culture that is integral to New Orleans.

Dapper Bruce Lafitte’s work has received national attention. He has exhibited at the Dieu Donne Gallery and the As If Gallery in New York and also at the Lambent Foundation in New York. His work was exhibited at the Contemporary Arts Center in New Orleans as part of Prospect 1.5 and at the New Orleans Museum of Art as part of Prospect 2. He’s produced thousands of works, introduced himself to prominent collectors and curators (including Diego Cortez, Jean-Michel Basquiat’s former agent, who represented Lafitte), and changed his name.

“WHEN I GOT BACK TO NEW ORLEANS AFTER THE STORM, I SAT DOWN AND STARTED TO THINK ABOUT ART AGAIN. I KEPT THINKING OF THAT SOCIAL WORKER WHO TOLD ME I SHOULD BE AN ARTIST. I KEPT THINKING OF MY GRANDPARENTS AND ABOUT THE PEOPLE WHO LOVED MY ART AND THOUGHT...I GOT TO PLEASE THEM. I want to leave a mark on New Orleans, like Katrina did.” - Dapper Bruce Lafitte