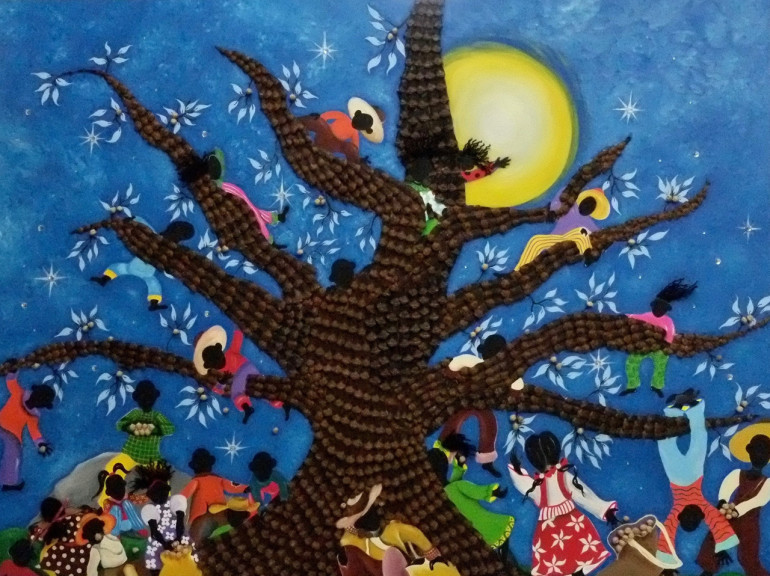 When my family and I lived on the farm, we always had different kinds of trees. Our favorites were the walnut and pecan trees. The trees were like our playground while we enjoyed the bounty it provided.

Many textures were used in my painting. For the bark of the tree, I used pine cones, because I wanted a tactile 3-D look; for the little girls' hair, I used unraveled yarn, chick peas for the walnuts, and acrylic paint for the overall flow of painting.

With this painting, Heritage, I wanted to depict not only the 15 siblings, but the other additional six siblings who had passed away. This is my recognition to my family in this life and the afterlife. I know they were always with us, growing up with us and playing alongside us.

As you can see, the subdued night sky is the veil between worlds bridging the reality beyond this world. The tree has always represented life and family. Its roots deep within the Earth represent our connection to Mother Earth. Its branches represent so much more forever reaching up to the sky, reaching up to "God" or the "Universe."

Heritage not only represents my family, but the families of the world. Everyone has a "family tree" which is their heritage. In discovering and honoring our heritage, we can see how connected we really are. We get to move forward in love and respect with the heart of a child.

Sabree (formerly Patricia E. Sabree) is dedicated in educating and preserving the Gullah culture through her art. Her Gullah artworks are inspired by her growing up on a large farm of 300 acres in Lake City, SC with 15 siblings. Each picture tells a story that can be healing and heartfelt for anyone.

Since a child, she loved art and eventually earned a Master's in Art Education. After teaching art for 20+ years, she was led to teach the world through her art about her Gullah heritage. In doing so, she honors the ancestors, her family and the Gullah culture.

In 2010, Sabree fully stepped out to preserve the Gullah culture as a full-time artist and entrepreneur. Since then, she has won several awards, appeared on television and radio interviews, and has been seen in countless newspapers/magazines expressing the appreciation of life of the Gullah culture.

The Gullah culture is a 400+ year-old culture that comes from a mix of West African cultures and the Southern culture. It has its own language, art, basketry, fish netting, cooking, storytelling, and more. It can be found along the coastal regions and inland areas of NC, SC, GA, and Florida. Sabree has a retail gallery in Savannah, GA that features her art and other styles within the Gullah culture.

Lady with a Fur