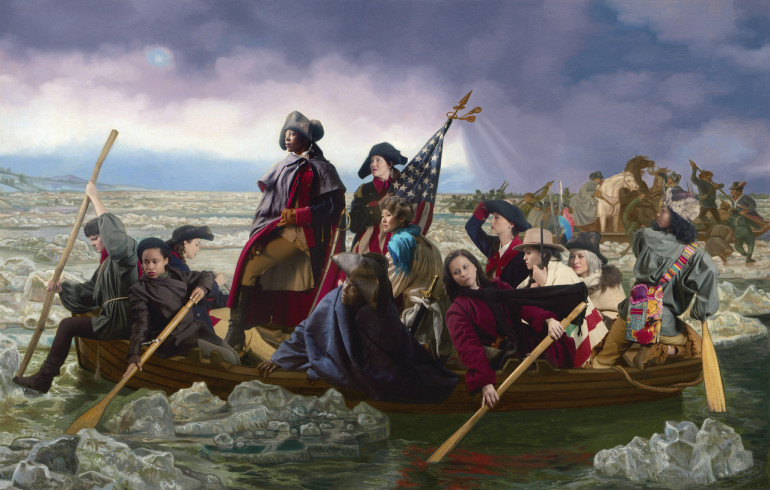 In Ode to Leutze’s “Washington Crossing the Delaware,” we sought to remake this iconic image, synonymous with America’s proud and independent history. Leutze’s masterwork from 1851, depicting the towering, regal General Washington leading his ragtag band of troops through the icy waves of the Delaware River, has been recast and recontextualized to reflect our diverse and tumultuous present. Washington’s troops, all white men in the original, are now represented by women of all ages and races. Costumes and staging are as accurate as possible, while small anachronisms-a bright paisley shoulder bag-create a sense of push and pull between past and present. For our piece could not and would not have been made in 1851. Even today, an image of an entirely female America is provocative to all and offensive to some. Our images serve as a corrective of the whitewashing of history through visual art-to remind viewers of the depth and diversity of our country's past that is rarely represented in its visual iconography. We seek to prod viewers to examine their own stereotypes and implicit biases, forcing them to evaluate what does and does not align with their expectations of how a work of art-and by extension, a culture-should look. In the midst of an election that has unearthed our country’s continued struggles with race, religion, and gender, our image serves as a reminder of how far we have yet to travel through the dark and icy waters of prejudice and discrimination.

e2: Kleinveld and Julien present viewers with re-imagined iconic images from art history. With subjects enacting roles with varied representations of race, age, and sexual orientation, their current series, In Empathy We Trust, “remakes with a twist” works by artists such as van Eyck, Rafael, Velázquez, Rembrandt, Vermeer, Fragonard, and Manet. Inspired by the original work, e2 hopes to jar viewers into questioning their own perceptions and seeing how stereotypes can lead to prejudice and discrimination. The artists believe in the power of empathy and images to change perceptions, minds and hearts.

Elizabeth Kleinveld is an artist and photographer from New Orleans. For her, art is about creative self-expression and storytelling, allowing her to respond to what she observes in the world. While some of her work is about striving to express the beauty she sees, other work focuses on themes she finds politically important. Kleinveld’s current work with e2 arose five years after Katrina, a natural and man-made disaster that brought social inequities in Louisiana into vivid focus.

Epaul Julien is an artist from New Orleans who began his career as a fine art photographer in 1995 when a near death experience changed his life. For Epaul, creating art is a necessity vitally linked to his existence. Raised outside New Orleans on a family plantation named Africa, Julien was always keenly aware of racial divides and stereotypes, which his work with e2 seeks to challenge and rebuke.

A Study in Firmness