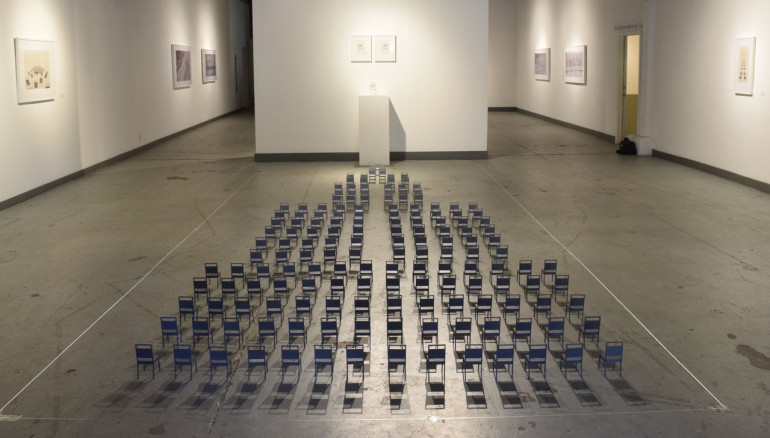 Western art has long emphasized the uniqueness of each human being, but beneath these independent identities and myths of rugged individualism lies our deep, intrinsic desire to be part of a group. The group provides security and comfort, but it is also vulnerable to manipulative leadership, oppression of independent thought, and exclusion of those seen as “others.” Using hundreds of simple, uniform chairs I create drawings and site-specific installations that examine this propensity towards collective behavior and its resulting power structures and homogeneity. Uniformity and repetition are more important than individuality in my work. Yet simultaneously, we are vaguely aware that each chair represents an individual. Though reminiscent of organized, ritualistic gatherings, the specific purpose of the chairs remains undefined and irrelevant, further emphasizing the sheer ubiquity of our collective behavior.

Maggie Evans is an artist based in Savannah, Georgia. Her work examines human collective behavior and the hierarchies, homogeneity and social divisions that result.

Evans has shown her work in fourteen solo exhibits, over fifty national group/juried shows and has received a number of awards including the 2017 Western Bureau Art Prize (San Jose, CA) and the Best in Category (painting) Award at Artfields 2017 (Lake City, SC). Reviews and publications include “The Washington Post," “New American Paintings and Manifest Gallery’s INPA 6.” Artist residencies include The Hambidge Center for the Arts (GA) Central Trak (TX) as well as a full fellowship to the Vermont Studio Center. In 2011, she was awarded a Chinese Government Scholarship that granted her ten months to develop new work at the China Academy of Art in Hangzhou, China. She has been invited to lecture on her work at a number of institutions including Indiana-Purdue University and the University of Texas, Dallas.

Evans holds an MFA in Painting from the Savannah College of Art and Design (2008) where she is currently a part-time Professor of Foundation Studies. In addition to her work as an artist, she performs regularly as a professional jazz singer and bassist.

I'm Not Exempt From the Whitest of Noise