In Memory of My Memory – Kris’ Leg 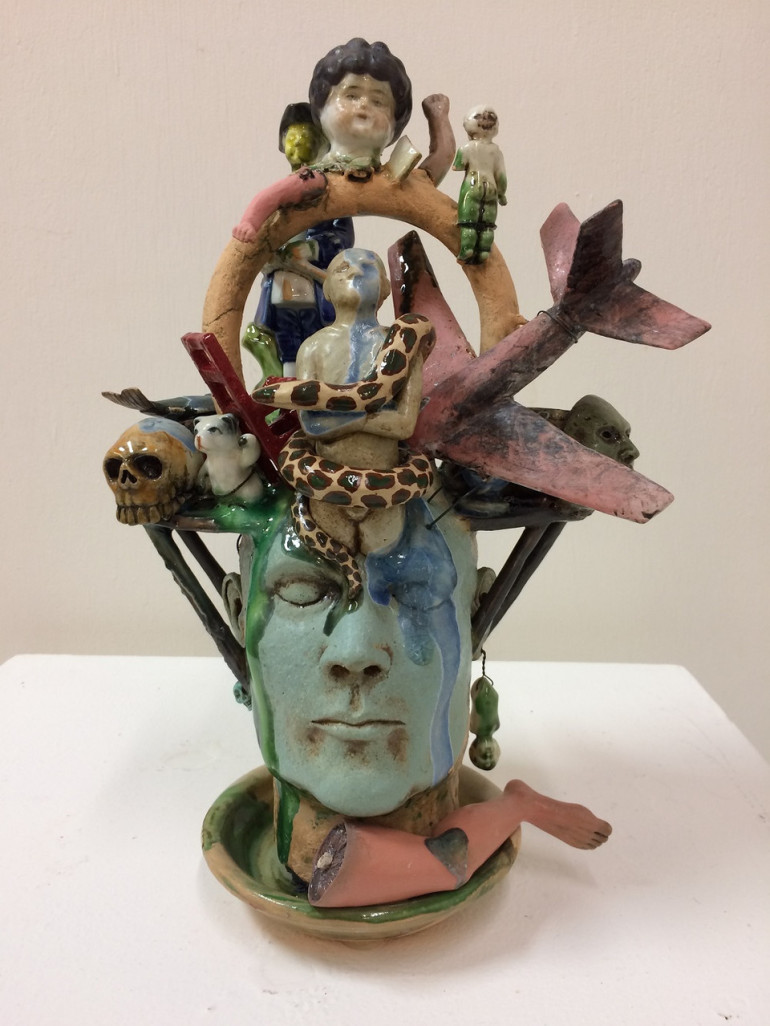 The impetus for my ceramic sculptures came from traditional Southern face jugs. I had switched to working in clay exclusively in the 1990s. I had been making sculptural assemblages but had to stop because I couldn’t use a table saw any longer as I increasingly suffered from seizures, which are the result of brain damage sustained in a bicycle accident in my youth. Table saws and seizures don’t mix.  I always had been intrigued by face jugs, especially those made by Southern slaves. At my middle school, we tried to develop projects that appealed to our African-American students, and so I decided to have them make face jugs. I had never made any, so I first created several jugs myself. Each batch got better, but more importantly, when I finished a batch, I couldn’t wait to make the next one. It just seemed to be in my bones. It felt like I had made them before – that I was catching up where I had left off. I wanted to let everything go in my current life and go back to a previous one that I had discovered. I once was lost and now was found. From the jugs I came to the current, more elaborate sculptures. It started when my then 4-year-old son Joe started to stick pottery shards, which I used for teeth, in one of my jugs. He went wild and put them all over the nose, eyes and lips. I began to help him and gradually really liked the results. My style was very different, and I had much more respect for the face, but to this day, Joe claims he made me famous.

Columbia, SC, resident Peter Lenzo (b. 1955) is a widely recognized ceramic sculptor with a national profile. The New York City native, who grew up in Detroit, was selected for the 1995 and 1998 South Carolina Triennial exhibitions at the South Carolina State Museum in Columbia; the 2011 exhibition Triennial Revisited and the 701 CCA South Carolina Biennial 2011, 2013 and 2017, all at 701 Center for Contemporary Art in Columbia; and Thresholds, a 2003 exhibition of Southeastern art dealing with religion and spirituality that traveled extensively throughout the Southeast. The June, 2015, exhibition Peter Lenzo; Joe Scotchie-Lenzo: Origins 2000–2002 at if ART Gallery in Columbia, S.C., presented the origins of Lenzo’s current work through two dozen sculptures he produced with his son, who was around five years old at the time the works were created.That same year, the same gallery also organized an exhibition of Lenzo’s new work, Peter Lenzo: New Works 2013 – 2015, also Lenzo’s most recent exhibition, In Memory Of My Memory, was earlier this year, at if ART Gallery. Lenzo’s work is in several museum collections, including at the South Carolina State Museum, the Mint Museum in Charlotte, N.C., and the Renwick Gallery at the Smithsonian Museum in Washington, D.C. Lenzo and his work have been featured in numerous books, exhibition catalogues and articles about ceramic sculpture and Southern art. He holds an MFA from Wayne State University in Detroit.

Here I Am, Still Standing