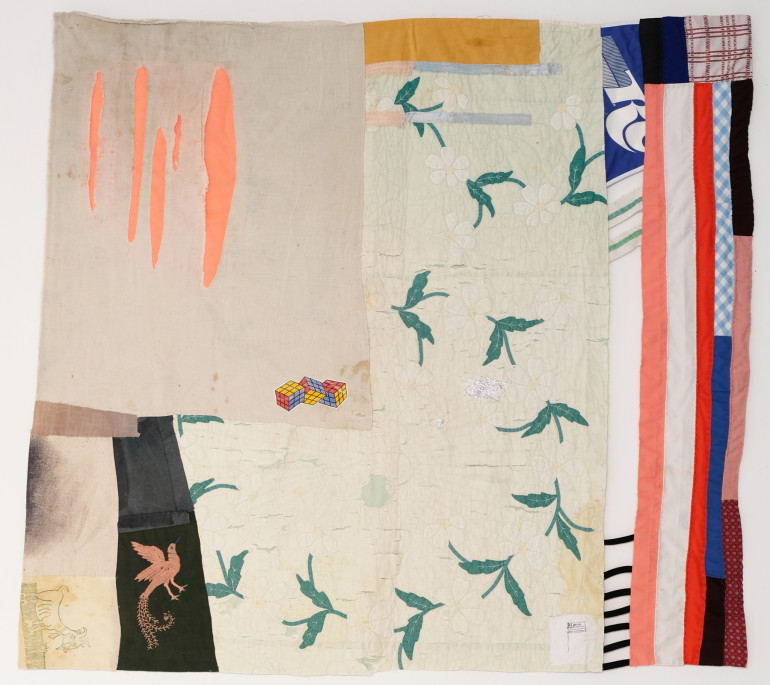 My all hand-sewn quilts are rarely about anything specific on an individual basis despite using various fabrics from periods in my life. In BULLSEYE I've used my own waitress apron strings, an RC Cola vendors apron, a silver prom dress my grandmother made for my Aunt, ripped cotton fabric I found inside an old quilt, a Rubics Cube t-shirt I wore as a child, etc. BULLSEYE is about focus and the power of work. The empty space is modeled after the Rauschenberg painting "Winter Pool." By default, my quilts often address the unequal judgement of women's craft and "higher" arts. BULLSEYE, like all my quilts, is about general associations to memory, connections through time and space, evidence of physical existence, and the wordless feelings. I think about composition, darks and lights. It's about the visual puzzle of beauty and balance. It is an exercise in manipulating and an homage to the mystifying (at least to me) miracle, of sorts, that is sight and touch.

Coulter Fussell was raised in Columbus, Georgia, an old textile town on the Chattahoochee River. The culture of Columbus and the surrounding valley (including the neighboring military base, Ft. Benning) play a significant role in her work. Coulter's father was a museum curator while her mother is a life-long quilter and educator. Running through galleries after school and going home to watch her mother sew was standard. The combination resulted an early-developed artsview where craft and arts are indistinguishable from one another. Painting and textile work became one solitary entity in her mind. From youth, the combination developed into an unintentional mash-up.

Coulter relies on the no-holds barred nature of contemporary painting rules to free her compositions from the constraints of pattern. In turn, she simultaneously relies on the strict discipline of traditional craftwork to act as a self editing tool.

I Have a Mind for Tea