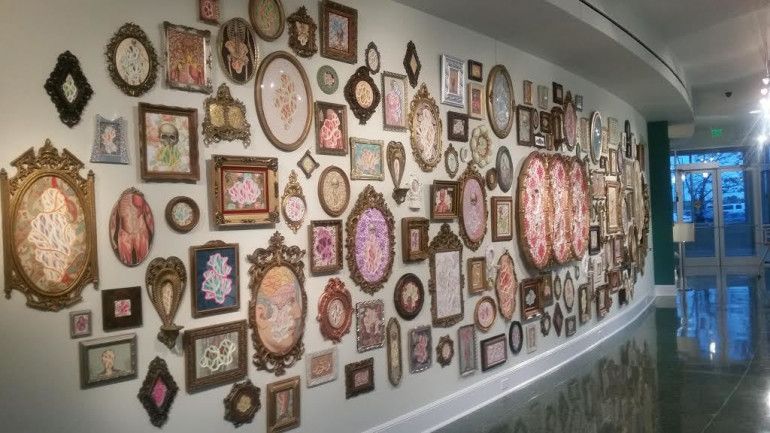 My work stems from the loss of both my mother and father due to smoking related cancers in February of 2013. Their passing left a deep void in my life that led to my interest in Memento Mori, or the act of coming to terms with ones own mortality. Through this investigation I came to terms with the trauma of my childhood and the lack of memories I actually have. Picture frames are usually reserved for those most cherished memories: a family outing, birthdays, weddings, or holiday get togethers. They rarely encapsulate the most important events: a death in the family, trauma, or abuse. My work seeks to investigate these moments as they force us to make decisions, decisions that lead to life changing events. We either rise to the occasion or sink into despair.

Charles Clary was born in 1980 in Morristown, Tennessee. He received his BFA in painting with honors from Middle Tennessee State University and his MFA in painting from the Savannah College of Art and Design.

He has shown in exhibitions at Galerie EVOLUTION-Pierre Cardin in Paris, France, Pierogi Gallery and Nancy Margolis Gallery in New York, Spoke art in San Francisco, and museum shows at Mesa Contemporary Art Museum, Gadsten Museum of Art, Currier Museum of Art and Cornell Museum of Art. Clary has been featured in numerous print and Internet interviews including, WIRED magazine (US and UK), Hi Fructose, Beautifuldecay.com, Bluecanavs Magazine, and This Is Colossal, as well as a recent feature in American Craft Magazine. He was also featured in the Art On Paper Art Fair with Kenise Barnes Fine Art in 2014 and with Paradigm Gallery in 2017. He has also been featured in publications including 500 Paper Objects, Paper Works ,Paper Art, Papercraft 2, PUSH: Paper, and The New Twenties.

A Moment of Peace