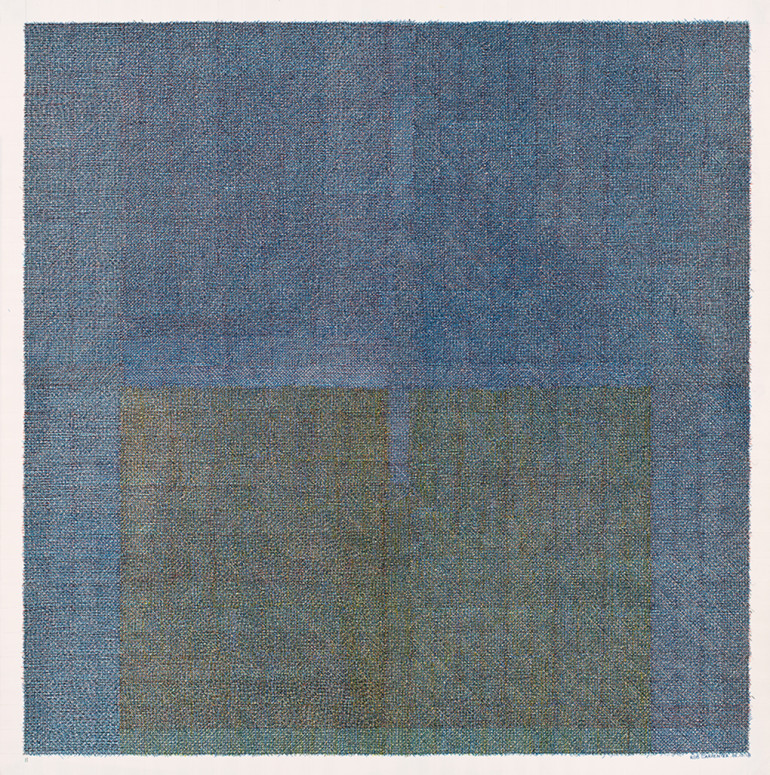 "Paths of Moving Points" is the title I chose six years ago when this series of drawings started because it is the textbook definition of this key element of art and these drawings rely heavily on that element. The reoccurring comment I often hear from observers about these drawings is that they resemble "weavings" or "tapestries." While that was not my original intention, I have grown to embrace that observation since in fact, the hundreds, if not thousands of lines do act like threads that have intertwined themselves visually on the paper just as threads of cloth do on an actual textile product. The process is slow, deliberate and I find it to be very meditative. Every drawing consists of many layers of lines. I choose a particular type of line and cover the surface of the paper. They may be straight lines, they may be lines that squiggle, they may be dashes, and they may be lines of varying widths, but after I finish one layer with that line type, I move on to another layer.

A Mississippi native, Carpenter earned his B.S. in History at Mississippi State University and M.F.A. in Painting and Drawing at Louisiana State University. Carpenter has been featured in Studio Visit Magazine and New American Paintings and has received two grants for outdoor sculpture and painting. His work has been featured nationally at the George Krevsky Gallery in San Francisco, the William Dale Gallery in New Orleans, The Medici Center for the Visual Arts in Philadelphia and The Metropolitan Gallery in Arlington, VA. Robert Lamb Carpenter lives in Baton Rouge, LA and works in his studio, "L'Atelier d'Agneau."

“The only thing that grows here now is cell towers.”

Join Me - A Prelude