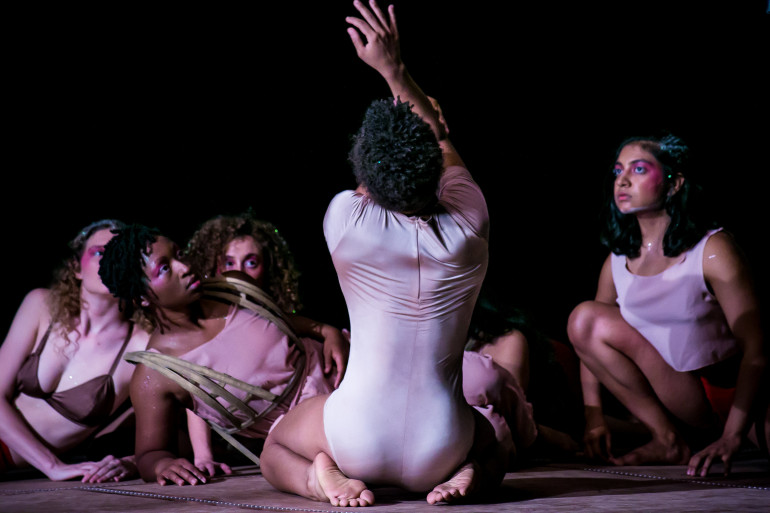 "Birth of Pleasure" is the narrative film adaptation of the live dance work, sanctuaries and fortresses.

Loosely based on the myth of Cupid and Psyche, "Birth of Pleasure" follows the journey of Psyche and the otherworldly beings who usher her into self-realization through a series of difficult tasks. By reimagining the myth with women of color as both protagonists and antagonists and integrating eroticism as a central theme, "Birth of Pleasure" creates tension between what it means to retell canonical stories and create authentic representations of ourselves.

In the process of creating "Birth of Pleasure", the myth and Audre Lorde's oeuvre were frameworks for relating current conversations around reproductive health to our own varied experiences with our bodies. Personal and political reclamation of our bodies, identities, and relationships informed the final movement and sound score, which teetered between episodes of violence, humor and joy.

Filmmaker Lev Omelchenko and choreographer Anicka Austin are a collaborative team from “sunday morning at 7”.

“sunday morning at 7” was a collective of artists from varied backgrounds and disciplines who met weekly for improvisational and choreographed movement experiments in 2017 and 2018. Creative process was always open to the public, even in its final stages. Because of this, the collective performed for ROOTS weekend’s Creating Place: The Art of Equitable Community Building, Adult Swim’s Bloodfeast and the pop-up art collaborative Argha Noah as commissioned guests. The collective’s final live work, sanctuaries and fortresses, premiered at the Bakery (ATL) in May 2018. The narrative dance film based on the live work, “Birth of Pleasure”, premiered at The Plaza (ATL) in May 2019. “Birth of Pleasure” is an Official Selection of Blow-Up Arthouse Film Festival. The film has played an integral part in the collective’s ability to share stories with people from all over the U.S.

The House Built on Chicken Legs