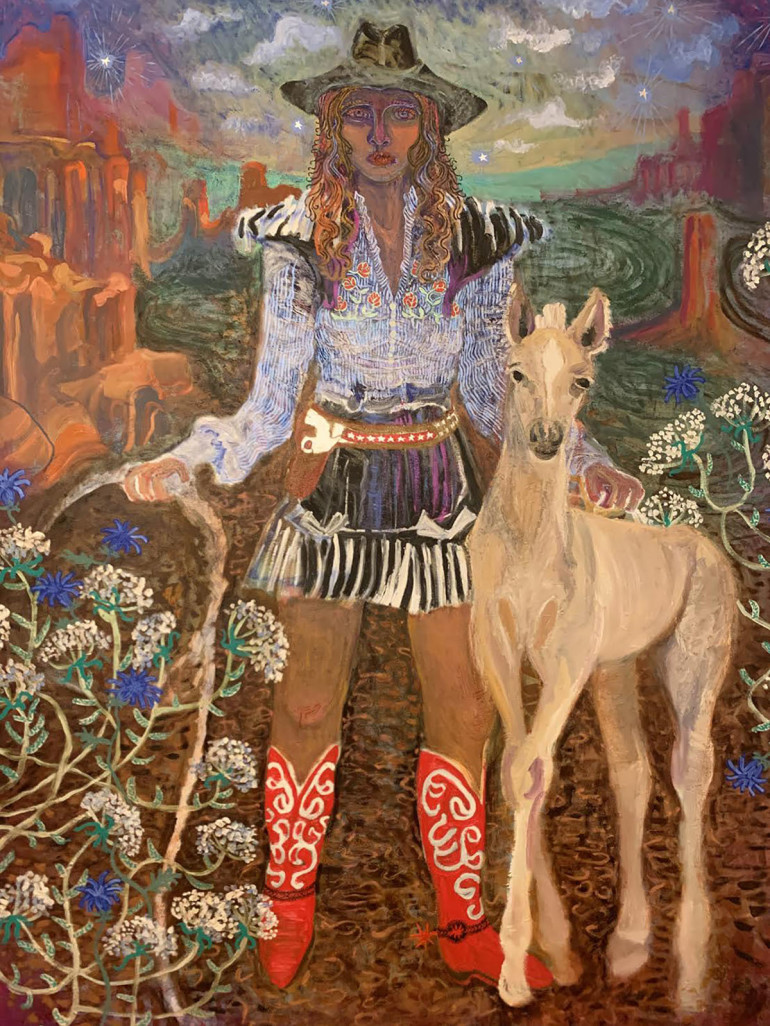 When I was a child I lived a fearless life. I spent most of my time outdoors. I'd never shy away from wandering alone. The outskirts of the neighborhood were ravines and their trees were my castles. Maturing into womanhood became a blank space that lives in-between my childhood and who I am now, the terrors of my twenties. Be careful what you drink, don't walk home alone, don't show too much skin. I learned what shame and fear meant. Many things were taken from me. A darkness crept into my life crippling me with agoraphobia. Recently I moved into my first stable home since childhood. I'm excited to start fresh with a sense of nostalgia. Painting is the tool I use to lead me back to the ravines of my youth. Lasso Lass is me, the wanderer, at the end of a long blank space in-between. I've survived the fearful times, knees bleeding, lasso gripped in hand, next to my palomino pony. I've rediscovered my childhood self I thought I'd lost.

Lauren Chapman (b. 1990) is from Tulsa, Oklahoma and lives in Columbia, SC. She received her BFA in Painting at the University of South Carolina. Chapman has been awarded the Scholastic Art & Writing Gold Key Award for excellence in Visual Arts, the Yaghjian Studio arts scholarship at USC, and the 2018 Artfields Solo Award Exhibition at Jones-Carter Gallery. She has been featured in Garnet and Black, Daily Gamecocks, The State, Free Times, and Susie Magazine. She has lectured for classes at the USC and spent a summer residency in Monte Castello, Italy. Exhibitions include group shows in Italy, New York, South Carolina and solo shows in Iowa and South Carolina. Her last solo-exhibition, "Tigress and the Silver Sea" was a series of oil paintings challenging tropes in mythological, biblical, and fairytale stories and questioning themes dangerous to women. Most recently Chapman curated Misenheimer's solo show "Borders" at the Koger Center for the Arts.

Love Letter To the World

Hours of the Moonflowers