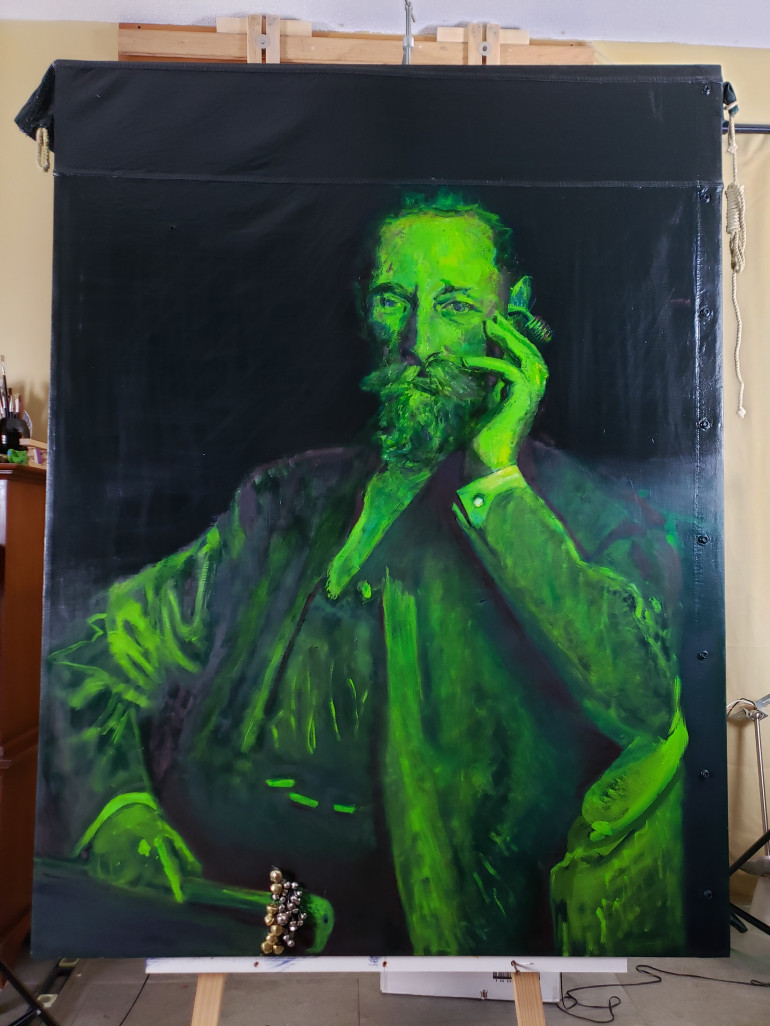 We seem to be plagued by fake news but no one can agree, in any small measure, on the perp(s). This is my interpretation of John Singer Sargent's 1905 portrait of Joseph Pulitzer but it's been updated for the times (or the post?). Trekkies may notice the earpiece suspiciously evocative of LT Uhura's. The eagle's head cane is now a jester's scepter impatiently waiting for a message from Star Fleet. I served 21 years in the Marines and my art is heavily influenced by that experience. This is painted on a genuine surplus US military shelter-half tent. Canvas has been a traditional art material as much as it's been a war material. I'm combining the two in what I call my #nvgpainting. NVGs refer to military night vision goggles, hence the green glow. The jingle bells on the scepter are attached to the painting using military communication wire for field phones. Semper Fidelis Shelter-half (NSN 8340015336606 / NIIN 015336606) Communication wire (NSN 5995016124981 / NIIN 016124981)

I am a painter, sculptor, father and adjunct professor. I've been teaching Art Appreciation at Central Piedmont Community College in Charlotte, NC since 2016. I am a former United States Marine. I enlisted in the Marines in 1985 and retired in 2006. I served in Iraq in 2005 as an Infantry Officer. I found art in my 40s early and it has been a stalwart companion ever since. I completed my MFA in 2016 at Lesley Art + Design in Cambridge, MA thanks to the GI Bill. I was born in the Dominican Republic on the heels of a civil war though I called Bethesda, MD home for my formative years. I've lived in North Carolina since 2004 and Matthews since 2008.