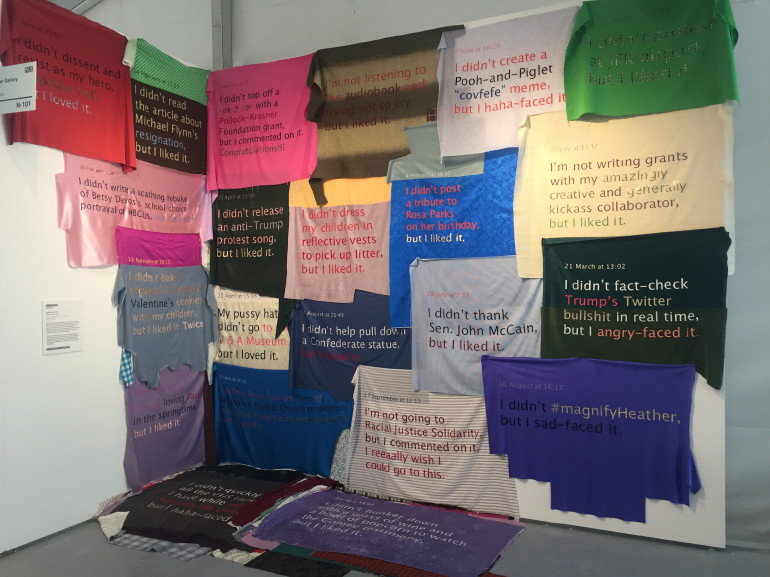 On January 27, 2017, President Trump signed the Muslim travel ban. Protests erupted at JFK airport and spread to airports around the country. I itched to join the fight—I had already marched on Washington and was calling my representatives daily—but I live two hours from the closest airport. So, I participated in the only way I could: scrolling through my Facebook news feed, doling out hearts to all the people doing the important work of protesting. It felt painfully inadequate. I realized that—in this new political reality—I could not maintain the precarious balance of my life. Adding "activist" to the roles I already inhabit—artist, educator, mother, wife—rendered me incapable of fulfilling any of them. When I view these inadequacies through the lens of social media, they are amplified. An idealized, impossible version of myself exists in virtual reality, as a collective compilation of others' activities. This documentation is my penance for failing. Every. Single. Day.

Jeana Eve Klein began working in textiles around the age of 7, when she pillaged her mother’s knitting basket and made 100 yarn pom-poms which she strung together and hauled through the house on a leash, like a long, limp pet snake. In the decades since, she has continued exploring the world of textiles in all its infinite, tactile, compulsive joy. Klein earned her undergraduate degree from North Carolina State University when the internet was still in its infancy, and then went on to earn an MFA from Arizona State University. She reluctantly entered the world of social media in 2007. Her work has been exhibited nationally, including recent solo exhibitions in Nashville, Las Vegas, and Raleigh. She is a 2014 recipient of the North Carolina Arts Council Individual Artist Fellowship. Klein lives and works in Boone, North Carolina, with her awesome husband and two super cute kids, none of whom are on Facebook. She is Professor of Studio Art at Appalachian State University.