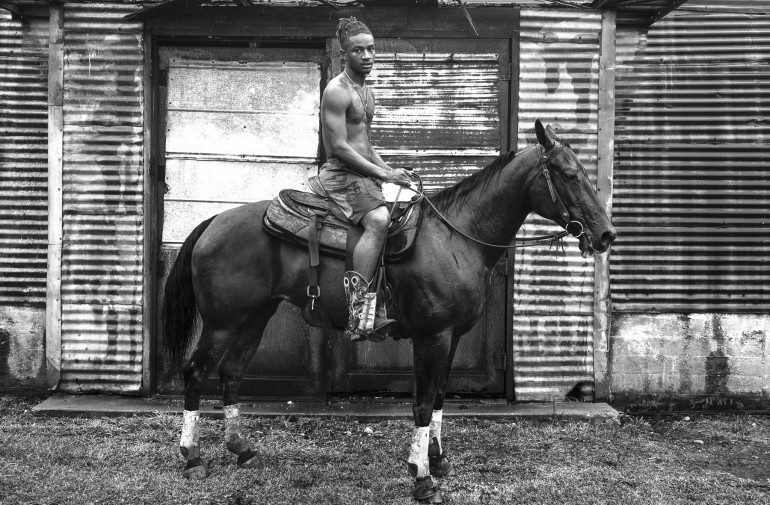 Black Trail Riding Clubs have their roots in Creole culture formed in South Louisiana in the 18th century. Today trail rides are an opportunity for generations of people to gather, celebrate, and ride horseback. The riders form a distinctive yet little-known sub-culture in Southwest Louisiana. In the wake of the Trayvon Martin killing, violence and indifference to the value of young black lives has been brought to the national spotlight in incidents across the country, from Ferguson, MO to the photographer's home in Baton Rouge, LA following the tragic death of Alton Sterling in 2016. In the context of this national backdrop, Ariaz's photographs depict joy, pride, and familial intimacy, particularly between fathers and sons who are taught to care for and ride horses from an early age. The work reflects the Creole culture and the celebratory spirit of the trail rides while sharing one of the many histories in the American story that has largely remained untold.

Jeremiah Ariaz is a Professor at Louisiana State University. His current project Louisiana Trail Riders features Black trail-riding clubs with roots in Creole culture formed in South Louisiana in the eighteenth century. The riders are a stark contrast to most depictions of cowboys and serve as a reminder that Black equestrian culture stems from a time when the Louisiana Territory was in fact the American West. For the photographs Ariaz was named the 2018 Louisiana State Fellow and awarded the 2018 Southern Arts Finalist Prize from South Arts. He was also the recipient of the 2018 Michael P. Smith Award for Documentary Photography from the Louisiana Endowment for the Humanities, a Community Partnership Grant from the New Orleans Jazz & Heritage Foundation, and an ATLAS grant.

A monograph of the work titled "Louisiana Trail Riders" was released last fall from UL Press and has been featured in the Paris Review, U.S. News and World Report, Oxford American, among others.

The Ghost Trees of Lake Moultrie