Turbulent Femme || toward a radical future 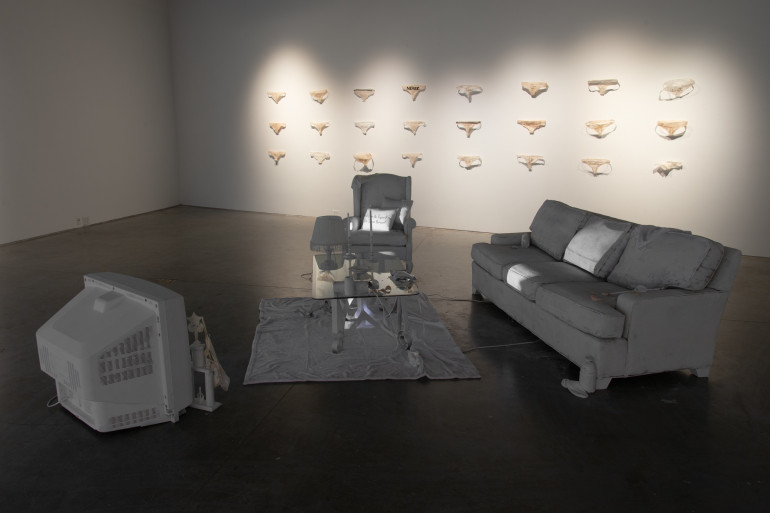 Turbulent Femme || toward a radical future is an immersive and interdisciplinary piece that challenges viewers to navigate feminine selfhood through institutional noise, pseudo-authority, and contrarian confessionalism. With text, sculpture, and projected image, the artists create a complex, navigable, and contradictory space that asks where, among patriarchal systems and internet quasi-feminism, actual American women might find the means to exist.

The voices within the piece are at once disembodied (represented by text projections of self-help -isms and frank articulations of desire) and embodied (via abstracted images of the female face and body), and traditionally female ephemera is at once familiarly domestic and abstracted. The text and images, though united in aims of self-definition, are critically contradictory; their texture realizes the impossibility of navigating through psychic noise and patriarchal systems toward one simple truth of contemporary female selfhood.

Alex McClay is a 2nd year graduate student at the Lamar Dodd School of Art at the University of Georgia. She received a BFA in Studio Art from the University of Cincinnati in 2014. She was a Core Fellow at Penland School of Craft from 2016-2018, where she studied printmaking and book arts. Her work has been shown across the country, most notably at the Weston Art Gallery (Cincinnati, OH), Lyndon House Arts Center (Athens, GA), and Robert C. Williams Museum of Papermaking (Atlanta, GA).

Sam Regal is a performer and writer of poetry, plays, and short fiction. Her translation of Yao Feng's One Love Only Until Death was published in 2017 by Vagabond Press, and her work has appeared in or is forthcoming from The Santa Ana River Review, Sum, The Wild World, NoD Magazine, and elsewhere. She has performed most notably with Jennifer Vanilla at MoMA PS1, Le Poisson Rouge, and Brooklyn Bazaar. Sam earned her MFA from Hunter College, where she was awarded the Colie Hoffman Prize in Poetry.