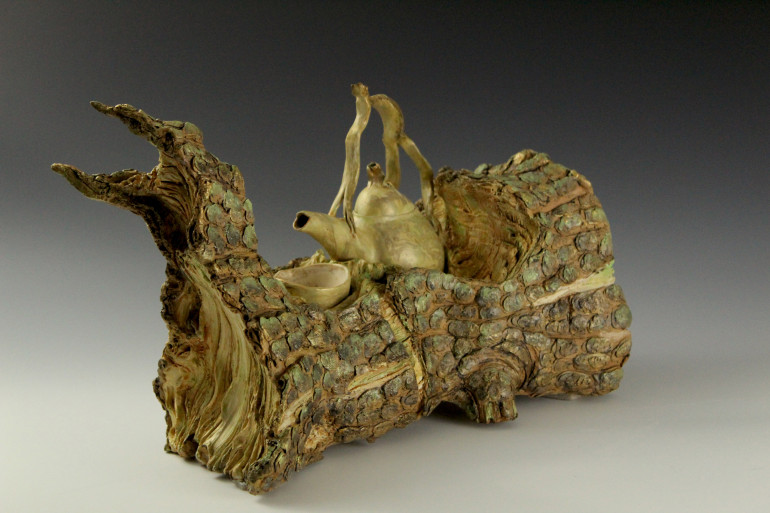 For a number of years I have focused strongly on building teapot sets within a sculptural tableau. The teapot naturally invites continuous exploration of form and expression. I just love them. Particular influences on my work are Chinese Yixing pottery and penjing (Chinese bonsai) cultivation. All the forms in my “penjing inspired” teapot works feature highly tactile surfaces fashioned to simulate aged tree bark characteristics while tree body shapes are modeled to resemble the convoluted, complex shapes seen in penjing tree forms. These works have become a means for me to combine my multiple interests in sculpture, functional pottery, and horticulture. Consequently, these complex teapot forms address my love of trees, highly textured clay surfaces, and the spatial dynamics of assembling multiple parts to fit within a composite whole – all while still being fully functional.

Ceramic artist and educator, Elizabeth F. Keller, is noted for her narrative ceramic sculptures and whimsical teapots. Until her retirement in 2017, she was an educator at Coastal Carolina University, earning full professor status in 2006 and the rank of Distinguished Professor Emeritus. Throughout her teaching career, Kellerâs focus had been on preparing students in 3D design and ceramics.

Kellerâs professional work has been featured in numerous peer-reviewed venues. During her 23 years at Coastal, she was active in over 90 exhibitions, including 37 national juried exhibitions and 8 international juried exhibitions, as well as a number of invitational and solo exhibitions. She has won numerous awards for her work in regional, national and international settings. A number of her sculptures and teapots have also been featured in 3 published books, 6 published catalogues, as well as in several well-respected, nationally published magazines in her discipline.

Chapel for a Post-Modern Theology

Au seuil de l'Oubli (At the Threshold of Forgetfulness)