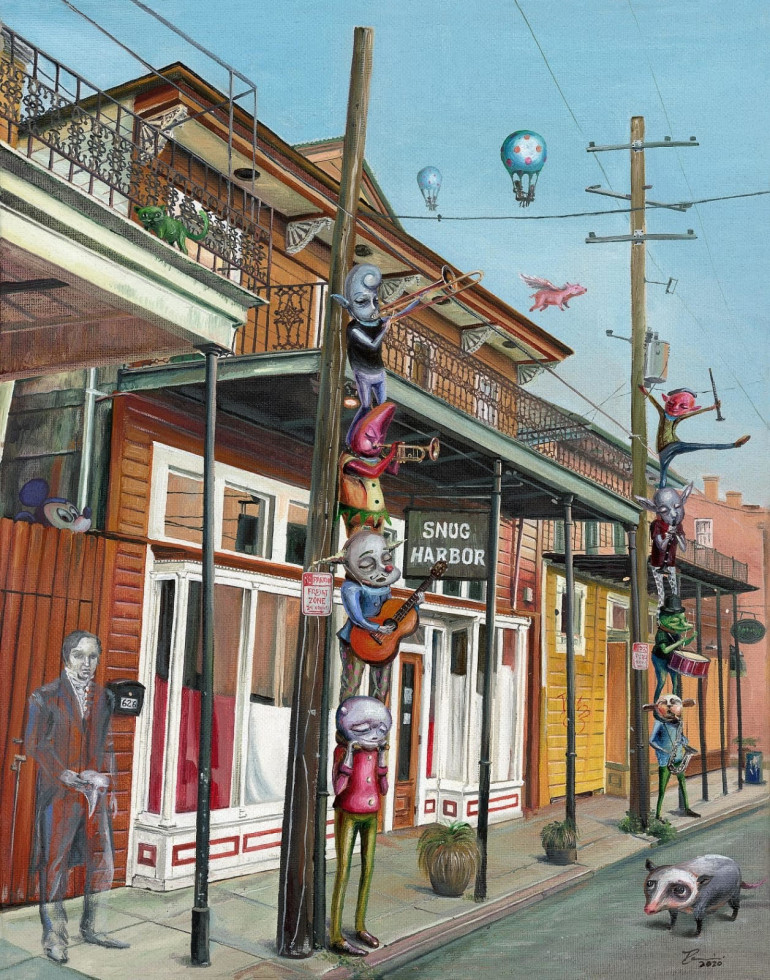 In the past several years, Frenchmen Street in the Marigny has become the beating heart of the live music scene in New Orleans. On a typical night you could walk down the street and from every open club door another type of sweet joyous sound would pour out - jazz, funk, R&B, Latin beats, and rock and roll. Even the street corners were a party, with brass bands and folk travelers with their banjos and improvised instruments. The pandemic may have made the musicians disappear from Frenchmen Street for now, but anyone and everyone can still feel their spirit, the soul of the city itself, vibrating on every corner waiting to come back. Here we see those spirits in front of world-renowned music venue Snug Harbor stacked up as if in storage. A possum emboldened by the human-free street watches cautiously. And presiding over all is the spirit of Bernard de Marigny, a representative of the neighborhood's past, observing centuries of change with interest.

I was born and raised in Havana, Cuba and graduated from an arts school in the city in 2002. I quickly began exhibiting ceramics and paintings around Cuba and Latin America, including pieces in permanent exhibits in the National Ceramics Museums of Cuba and Argentina. After experiencing government censorship of my art and then visiting an international crafts fair in Mexico with a group of Cuban artists in 2012, I realized that in order to reach my full artistic potential, I would have to leave Cuba. I was granted a professional visa to go to an arts fair in April of 2014 in Mexico near the border. Once there, I crossed over to the US on foot and was granted political asylum. I spent seven months in Miami before relocating to New Orleans.

New Orleans reminds me of all of the good parts of Havana - the music, the architecture, and the creative spirit of the people. Once I settled there, I began selling my art at a local market and exhibiting around the city and country.

Hierarchy: Layin' it All Out, Fuercitas! Round II