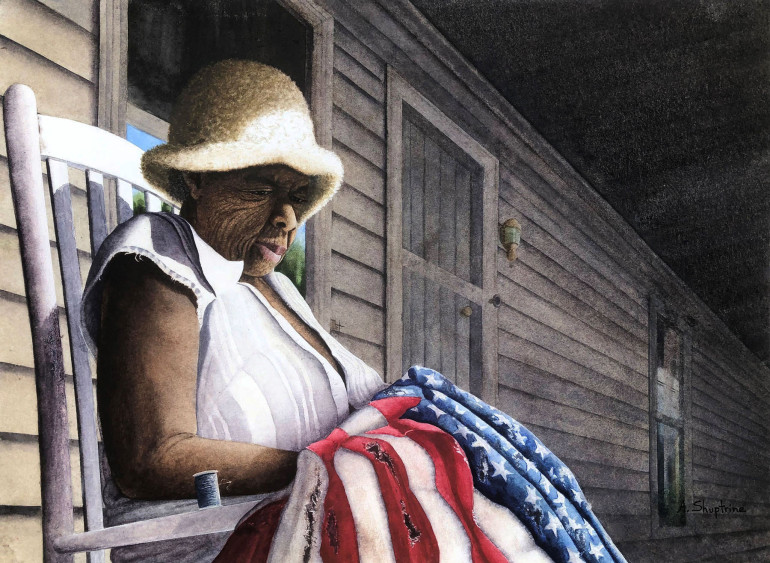 “Her name is Henrietta. She allowed me to photograph her for a painting subject. She was wary and reluctant at first, but we became fast friends. As she gently worked the thick cloth with her worn and beautiful hands, she told me of her life growing up on a corn farm in southern Mississippi. She worked slowly and methodically, and I was entranced..”

A painter known for his Southern genre, Shuptrine has extended his reputation from a renowned master craftsman /water gilder to nationally acclaimed watercolorist. Born the son of recognized painter, Hubert Shuptrine (1936-2006), Alan has continued the legacy of realism that his father began. A resident of Lookout Mountain, Tennessee, Shuptrine's pursuit of the arts includes schooling at The Baylor School (Chattanooga, TN); The University of the South (Sewanee, TN); and The University of Tennessee (Knoxville, TN). Shuptrineâs medium is primarily watercolor which he applies and controls in various techniques, from wet-in-wet to drybrush. His paintings were displayed in the solo museum tour, Appalachian Watercolors of the Serpentine Chain, at the Tennessee State Museum (Nashville), The Morris Museum of Art (Augusta, GA), and the Huntsville Museum of Art (AL) from 2017 - 2019. He recently published a book of his watercolors that won an IPPY Gold Medal for Best Southern Non-Fiction.

No One is Innocent

The Five Shamans of Our Needs