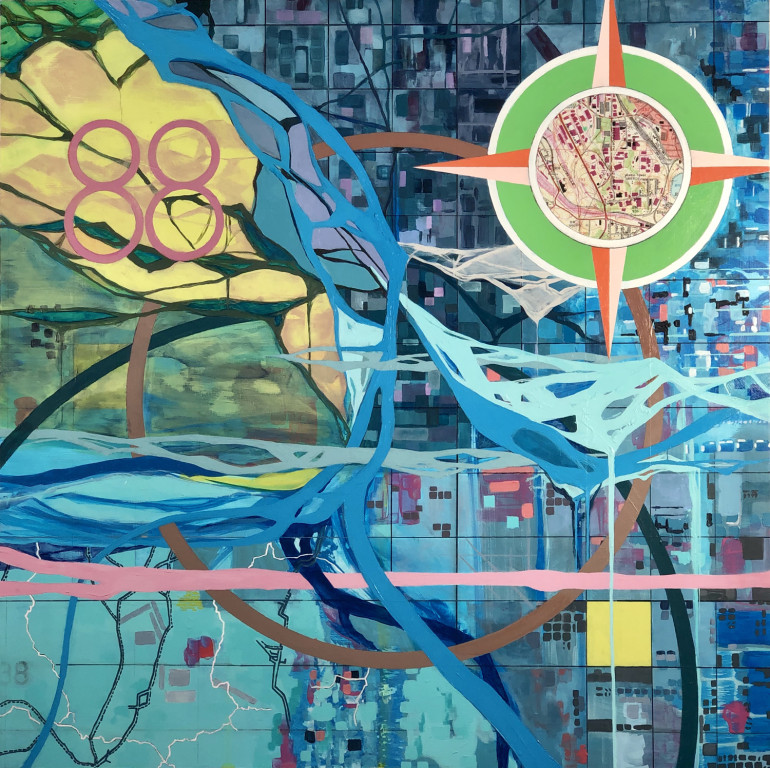 "ALT-Dissimulation" is part of an ongoing body of work that addresses my highly conflicted emotions regarding the South and the complications inherent in reframing its identity. In many ways, this part of the United States has moved far from its ugly, racist past. Yet, not in all ways and certainly not completely. As someone who has always struggled to identify with one place and a fixed belonging, I make use of a range of maps and mapping symbols in my paintings. In addition, I use personal and historical iconography in an effort to reconcile both personal and social issues by anchoring the memory of a place in time. In my current body of work, I explore the identity of the “new south” as it has moved to outgrow its past while, at the same time, never fully acknowledging it. "ALT-Dissimulation" contains the symbol 88, used by white supremacists, floating in an abstract "sea" of satellite imagery of the midtown Atlanta area, the compass rose, and a contour map of old Atlanta.

Jill Pope was born in the Northwestern United States and grew up in midsize cities and small towns throughout the U.S. relocating cross country four times in six years during the critical adolescent years. She earned her Bachelor’s degree in Journalism from the Henry W. Grady School at the University of Georgia where she was selected to be a student judge for the prestigious Peabody Awards. Pope earned her MFA in Drawing and Painting from Georgia State University in Atlanta and is a Helene Wurlitzer grant recipient. Solo exhibitions include the Contemporary Art Workshop, Chicago, and the University of Illinois, Chicago. Pope has shown in galleries and museums throughout the US including Atlanta, Nashville, and Indianapolis as well as Chicago. Pope's paintings are held in collections nationally and internationally. Her current work deals with the still unresolved markers of racism in this country, particularly the South, and her own conflicted emotions about the South.

Out of the Rain