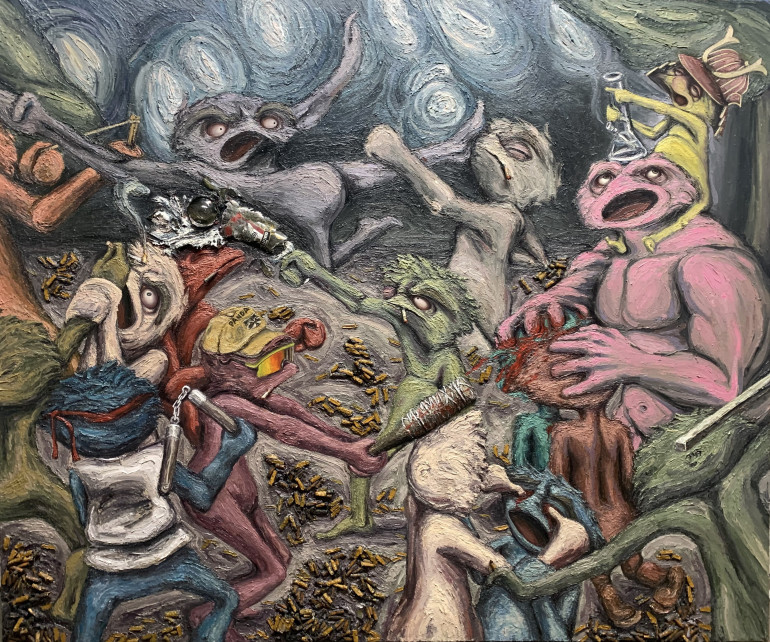 Civil Discourse ll is an allegorical depiction referencing the current contentious political atmosphere of the United States of America. Exasperated by the polarizing pressures of America’s rigid two party electoral system, partisan media, identity politics and social media making cultural differences seem larger than they may be. All of which has the effect of ratcheting the stakes of every upcoming election cycle into a single fronted, zero sum ideological contest between those of opposing partisan divide where the gain of one comes at the loss and by extension, compromise of the other’s deeply held cultural, racial and religious beliefs and interests. The inevitable result of such bitter division fomenting the segregation of individuals and society down partisan lines, argumentative discourse, threats and violence between activists.

Born in the former USSR, my family emigrated to the United States as refugees escaping religious persecution under the Vatican and Reagan administration‘s sponsorship, ultimately taking residence in Tulsa, Oklahoma. Upon completing high school, I joined the United States Marine Corps where I served as a recon marine with the USMC’s elite 1st Recon Bn., accruing multiple combat deployments to Iraq in support of Operation Enduring Freedom in the global war on terror. After completing my enlistment, I moved on to study business administration at Tulsa Community College where I eventually discovered an interest in art at a figure drawing class. That interest escalated quickly and one year later moved to Brooklyn, NY to further my art education studying painting at Pratt Institute at the ripe age of 28. I now spend my days painting in my studio in Taylors, South Carolina.

There Is A Light