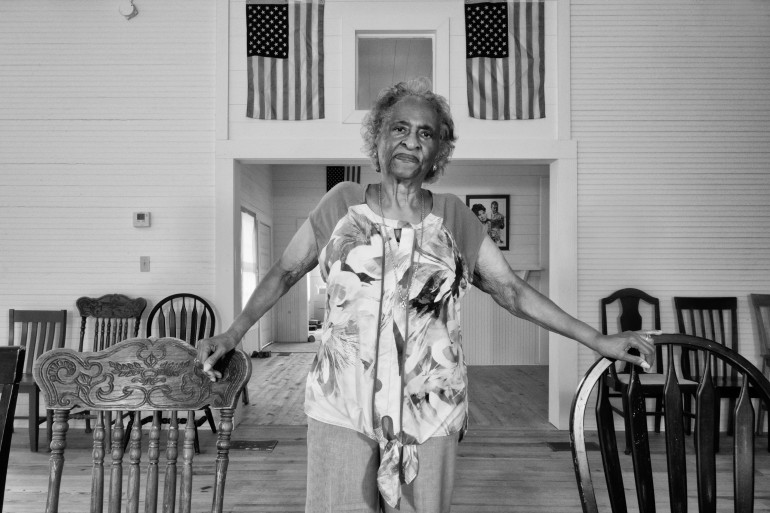 In the early twentieth century, a partnership – between a white, Jewish, northern businessman and a Black, Christian, southern educator – built thousands of schools for African American children across the segregated South. Julius Rosenwald and Booker T. Washington reached across divides of race, religion, and region and created the program known as Rosenwald schools. Ellie Dahmer stands inside the Bay Springs School (Forrest County, Mississippi, 1925-1958). Her husband, Vernon Dahmer Sr., had been a student at the school. He became the head of the NAACP in Forrest County, and when the school closed he turned the building into a center for civil rights activism. Vernon Dahmer Sr. was later murdered by the Ku Klux Klan. Ellie Dahmer also attended a Rosenwald school. She began a long education career as a teacher at Bay Springs. The schoolhouse was recently restored by the Dahmer’s son Dennis. It again serves as a community center.

Andrew Feiler is a fifth generation Georgian. Having grown up Jewish in Savannah, he has been shaped by the rich complexities of the American South. Andrew has long been active in civic life. He has helped create over a dozen community initiatives, serves on multiple not-for-profit boards, and is an active advisor to numerous elected officials and political candidates. His art is an extension of his civic values.

Feiler’s photographs have been featured in the Wall Street Journal, Smithsonian, Architect, Preservation, The Forward as well as on CBS This Morning and NPR. His work has been displayed in galleries and museums including solo exhibitions at such venues as the National Civil Rights Museum at the Lorraine Motel in Memphis, National Center for Civil and Human Rights in Atlanta, and International Civil Rights Center & Museum in Greensboro, NC. More of his work can be seen at andrewfeiler.com.

Wish You Were Here

Another Summer Afternoon on the Blue Ridge Parkway