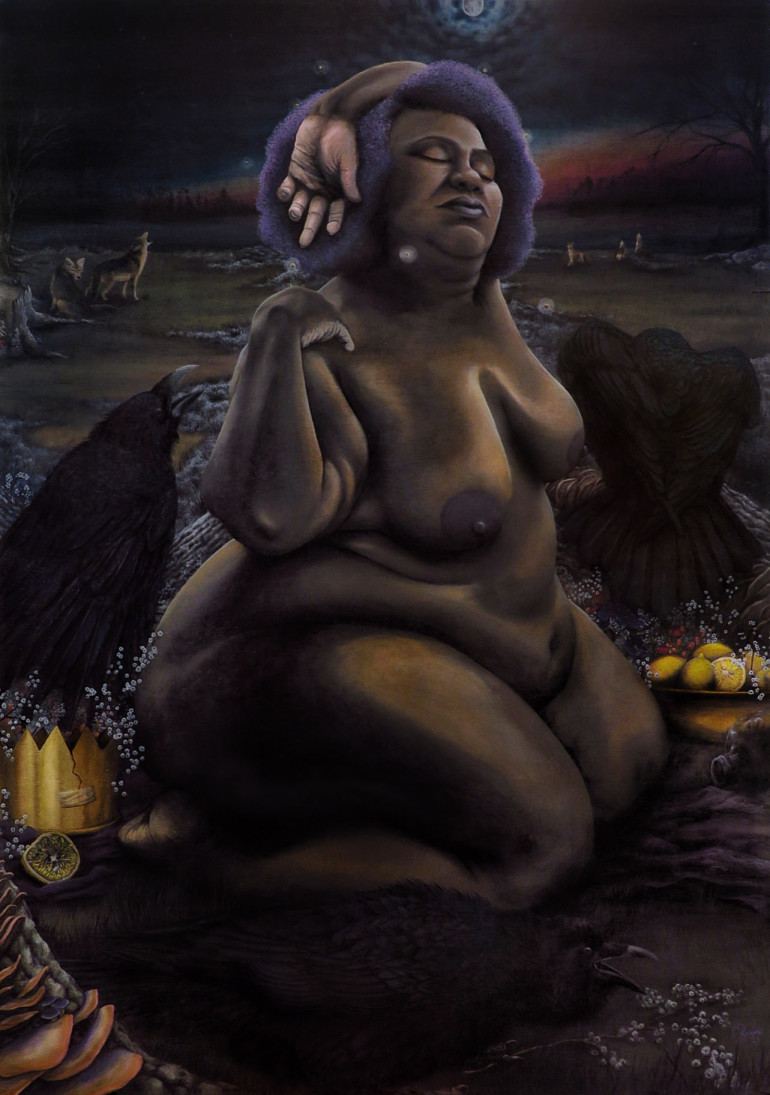 This piece is a visual love song dedicated to the bodies of women. Particularly, Black women...but more specifically, us big Black gals. Society's taught us that "fat" is a curse word, and that intrinsic Blackness isn't ideally beautiful. Dark complexions, kinky hair (3c-4c, iykyk), full lips, wide noses, and natural shapely figures are often underrepresented on positive worldstages. Here, however, in a chorus defying societal beauty standards, the ancestors encircle as nature exalts Her. She's reminded, lemons are the makings of creation's sweetest lemonade. She's not dark-skinned—rather, she mirrors Earth, deep hills and valleys kissed by the sun and embraced by the moon. The crown atop her head is thick, healthy, regal, boastful, and vibrant. Her unaltered breasts nourish life, embody genuine ample femininity. She is gloriously voluptuous, naturally large and lovely, soft and hardened in the image of God. Perfectly "imperfect" as she reigns, queen with or without anyone's approval.

Corinne was born and raised in Daytona Beach, Florida. As early as 3 years old, she became a student of watercolors and acrylics while under the tutelage of her maternal grandmother. Art and creativity have steadily been an integral part of her daily bread since. After graduating college with a BFA in Graphic Design, she worked in the field for a while but became jaded after the death of her father. The need for more human interaction and physicality led Corinne to become a licensed massage therapist while continuing to freelance design and paint. She's greatly influenced by the stories of us—exploration of form, emotion, feminism, culture/ethnicity, history, social constructs, spirituality, and her own misadventures as a "tall southern biracial bbw with hair and soul as wild as the day is long"—her heritage is a big source of personal pride and curiosity. Simply, she's a figurative artist with penchants for acrylic paints, love, the underdog and that wide open space outside the box.

No one told me

I Have a Mind for Tea