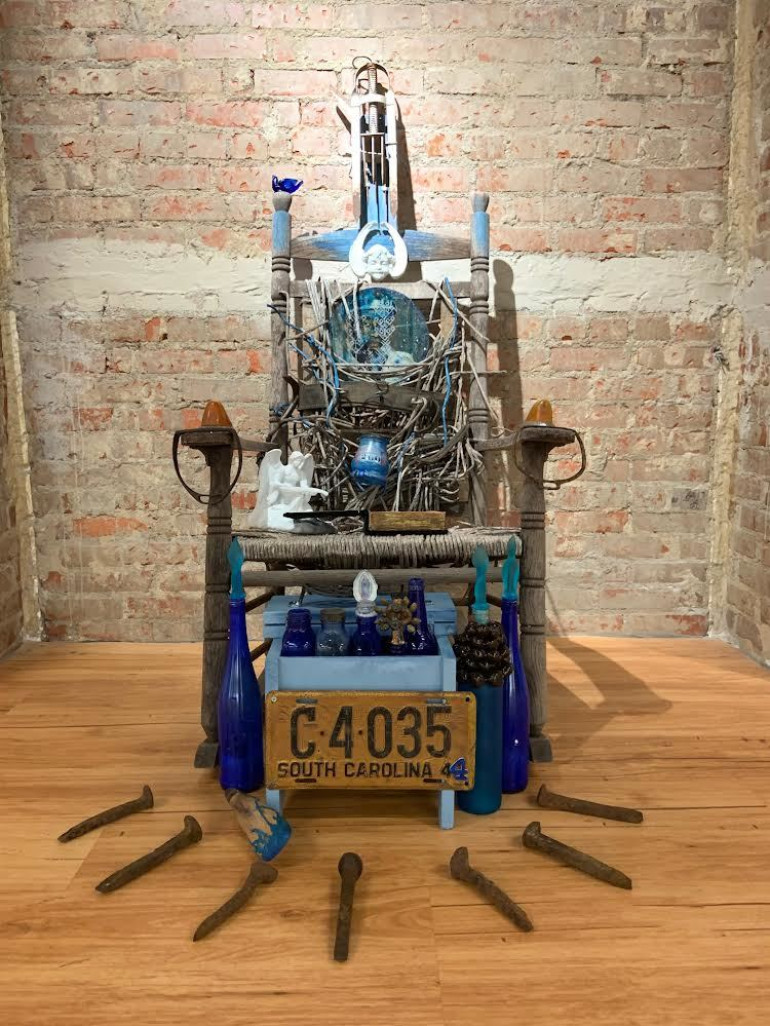 "Rock-A-Bye Baby" Is part of a series of works created and inspired by the old song, "Angelitos Negros" also known as Why Are There No Black Angels. This submission was formed from salvaged objects that were assembled to recreate a mock 1940s electric chair. The installation is adorned with a reverse glass portrait of George Stinney Jr, the youngest person sentenced to death in the electric chair for the murder of two young white girls in South Carolina during the segregated south. He was arrested, wrongly convicted, and unjustly sentenced to death all within a month. This piece speaks volumes about the social inequities, loss of innocent life, and generational corruption in America's penal system. This case was reopened and overturned in the South Carolina court system in 2014. The blue bottles represent haint trees to pay respects to ancestors that have passed. The southern haint tree tradition originated from the Congo and survived throughout slavery, to the present day.

J’Renee is internationally known for her reverse glass paintings or Eglomise, depicting southern lifestyle themes, tropical design, and the life and times in New Orleans, pre and post Katrina. She enjoys painting images and/or scenes depicting images that promote thought on issues of social justice, history, and folklore. She graduated from Xavier University in 1989 with a Bachelor’s degree in Fine Arts. Jrenee’s first major public exhibit was in 1991 with renowned artist William Tolliver. She worked with him as his Apprentice. Grammy award-winning musician and producer Daniel Lanois commissioned J Renee to do a mural. Jrenee was also commissioned by RCA to do a painting for Delfeayo Marsalis first solo release album cover called Pontius Pilate's Decision.

An Offering to Hestia

"Topographical view of the concept of the Loch Ness monster and the colors of every Triple Crown winner seen organized using the Law of Superposition which are obscured by 9 iron men and 15 Chinese flags."