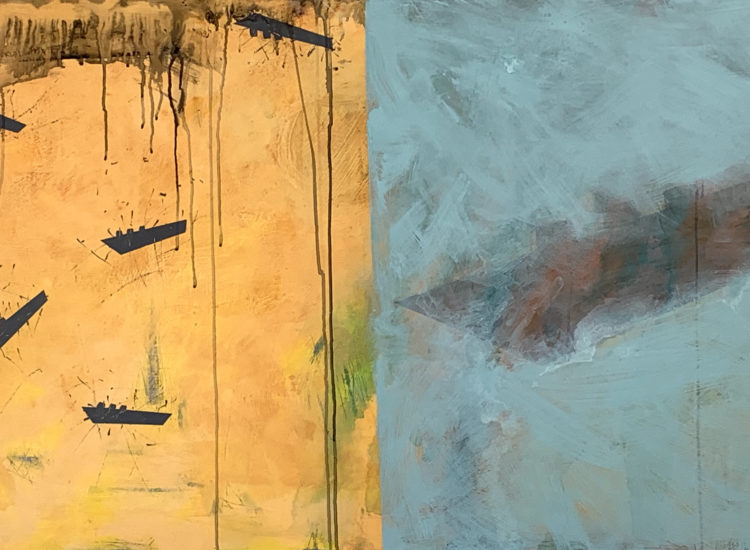 In the upcoming gallery exhibition, Environment for Connections, at TRAX Visual Art Center, Sandy Cook has curated work from many artists from the Lake City area and beyond. The gallery holds different pieces of work that celebrate artists from all backgrounds and tell their stories. The artists contributing to this show are: Jan Chenoweth, Ashley Hamilton, Roger Halligan, and Tiffany Thomas. Check back as we add more artists to the mix!

Colleen Critcher: Critcher is a visual artist fascinated by commodity culture, kitsch, and plastic things. Her works routinely explore images of whimsical figurines, most commonly garden gnomes and dinosaurs. Through careful visual exploration into seemingly menial things, the work reveals the powerful emotional significance of common objects and serves as a commentary about the role consumption culture plays in modern happiness. She inserts herself and others as characters in a humorous narrative, weaving personal reflections into a truly complicated web of consumerism and human emotion. Critcher received her MFA in Painting from Savannah College of Art and Design in 2012. She currently lives in Florence, South Carolina where she maintains a studio and teaches at Francis Marion University. Click here to explore her website!

Jan Chenoweth: For Chenoweth, art has been a life-long pursuit enriched by her formative years in South Florida and unquenched wanderlust.  She was born in Miami Beach, Florida in 1945 and after many stops along the way, now resides and works in Lake City, SC.  Her BFA studies were primarily at the University of Illinois and Virginia Intermont College with a concentration in painting. She received her MFA in Studio Arts with a sculpture concentration from Florida State University. Her early years in the tropics provided a rich stimulus for the sense of color and texture that have remained a vital part of her art throughout her career. Colors, forms and structures have always been starting points for her art. Click here to view her website and learn more!

Lynda English: English is a native of Florence, SC, who has been painting for over 40 years. She is a Member of Excellence in the South Carolina Watermedia Society and a Signature member in the Southern Watercolor Society (SW) and the Colored Pencil Society of America (CPSA). She and business partner, Jackie Wukela, own the Lynda English Studio-Gallery in Florence, SC. Lynda teaches an Open Studio class (all media) at her Gallery and teaches watermedia workshops across the State. Lynda’s artwork can be found in several South Carolina bank collections, government offices of Charleston, SC , the McLeod Hospital, and private homes across the United States and in Germany. She also continues to paint portrait and landscape commissions in watercolor and oils. Check out her website here to discover more about her artwork!

Mike Fowle: Fowle is a self-taught, contemporary sculptor working in multiple media.  He is an approved artist for the South Carolina Arts Commission and maintains a working studio where he creates art for public and private collections. Fowle began art studies with Ceramics instructor Yosuke Haruta, with an emphasis in traditional wheel thrown pottery and glaze calculation at Jackson College, Jackson Michigan in 1979. In 2005, Mike Fowle assisted Patz Fowle in an International Artists-in-Residence at the American School in Japan in Nomizu Chofu-shi, Tokyo, Japan. In 2008, Fowle was commissioned to create a permanent Wall Installation Sculpture commemorating the Environmental Discovery Center at the Lynches River County Park in South Carolina. Mike also had a sculpture in the Palmetto Hands 2008-2009 traveling exhibition sponsored by the City of North Charleston Cultural Arts Department.  Mike’s Sculpture titled “New Blue Shirt” was also exhibited in the South Carolina State Museum 2009. A collaboration with Patz Fowle won the 3D People’s Choice Award at ArtFields in Lake City, SC. Visit his website here!

Patz Fowle: Fowle is a professional 2D and 3D visual artist and innovative teaching artist. Examples of her award-winning art and original techniques are chronicled in numerous art publications and featured on a short documentary on a SCETV series on PBS.  Fowle began traditional ceramic arts training under the direction of Master Potter, Yosuke Haruta. In addition, she has studied briefly at Parsons School of Design/Adelphi University, Kansas City Art Institute, Savannah College of Art and Design and the School of the Art Institute of Chicago where she is a mentor for the Teacher Institute in Contemporary Art. Fowle is an art instructor for the SCAD Educator Forum summer program at Savannah College of Art and Design and was the recipient of the 2015 3D People’s Choice Award at ArtFields in Lake City, SC. Check more of her work out on her website here!

Greg Fry: Fry is an artist from Goshen, Indiana who now lives in Florence South Carolina. He earned his MFA in Fine Arts/Printmaking from University of South Dakota and has served as a Professor of Art at Francis Marion University since 2006. As he teaches, Fry hopes to help students begin to make sense of inner values, individualism, and the socialization process. It’s his intention to give guidance so students will be enabled to survive in the arts. Read his artist statement and learn more about his teaching style here!

Ashley Hamilton: Hamilton is a painter currently living in Lake City, SC. A native of Nashville, Ashley began her art education at Nashville School of the Arts. She spent a year studying abroad at Queensland College of Art in Brisbane, Australia, where she focused mainly on printmaking and installation. She received her BFA in drawing and painting from University of Tennessee in Chattanooga. Ashley’s work often explores issues regarding the struggle of self-identity, focusing on psychoanalytical notions such as displacement and repetition compulsion. Although trained as a painter, her work exists in an expanded field of painting, manifesting in various ways including performance, sculpture, installation, and video. Click here to view her website and learn more!

Roger Halligan: Halligan has been creating sculpture professionally since the mid seventies.  After graduating with an MFA with honors in Studio Arts from the University of Georgia in 1977, he moved to North Carolina where he became an exhibit designer for the North Carolina Zoological Park.  As part of a team of artists they developed award winning design/build  naturalistic habitats for a variety of species of wild animals.   He left the zoo in 1992 to devote his time to his fine art  work.  In 1993, the design team was awarded the State of North Carolina Governor’s Award for Excellence for their working in the design and construction of the Sonora Desert Habitats. In 2007, he was awarded an ArtsMove Chattanooga Grant and relocated his studio and home to downtown Chattanooga, Tennessee.  Most recently he and his wife, the artist Jan Chenoweth have moved their home and studio to Lake City, SC. Click here to view his website and learn more!

Tiffany Thomas: Thomas is a native of Florence, South Carolina. Born in 1985, she was raised on a farm and experienced the ups and downs of living a farm life. She incorporates her childhood into her paintings by using bright colors, which are associated with playfulness and collage paintings with reclaimed wood that her family discarded from old houses, buildings and dumpsters.  Her clay of choice is translucent porcelain, fired with colorful stains and glazes. Her ceramic work focuses on an array of designs; from cups and mugs to light fixtures and table pieces. All of her pieces are hand carved. Tiffany graduated from Francis Marion University in 2012 with a degree in Visual Arts with concentrations in ceramics and painting. Her goal is to not only sell art nationally online and through galleries and craft shows, but also to demonstrate to others how art can bridge communities and make the world a better place. Click here to view her website and learn more!

In the upcoming gallery exhibition, Environment for Connections, at TRAX Visual Art Center, Sandy Cook has curated work from many artists from the Lake City area and beyond. The gallery holds different pieces of work that celebrate artists from all backgrounds and tell their stories. The artists contributing to this show are: Jan Chenoweth, Ashley […]