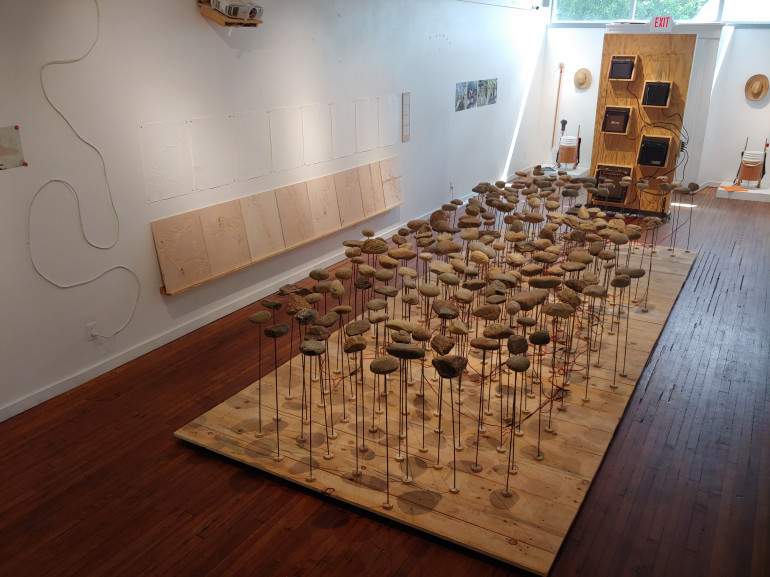 Hear + there is intended to recontextualize an experience and locale through the use of Sound- Recording- Collecting- Ritual- Residue- Chance- Mark Making- and Space. Two custom wooden backpacks were created from a combination of local and regional materials that form the base of our story and meant to serve as performative symbolic tools. Sound, image, and GPS capturing equipment were added later for data collection, which reflects modern ways of storytelling. These were employed to explore and document the estuaries of Judacullawi -place of Judaculla- or greater Cherokee region of Cullowhee. While traversing these waters, we collected river rocks, sounds, images, and movement tracking data. Custom branded t-shirts commemorate the event. Each component is utilized within the installation to show fragments of the event. The audience's physical interaction with select microphoned rocks creates acoustic storytelling, amplified through a speaker wall; providing a new formed experience.

Raymond Baccari is a current MFA candidate at Western Carolina University. He lives and works in Waynesville, North Carolina. While attending WCU, Raymond has participated in shows in Asheville, Raleigh, New York, Philadelphia, and Ireland. Living in Appalachia has had a significant influence on Raymond’s current work, with the area’s deep European and Cherokee history. During his time in Waynesville, he has been able to collaborate with these communities in socially engaged workshops through LIVLAB and Roadworks. Along with his socially engaged workshops, he is also known for interactive, sound-based sculpture and installation. These sculptures explore mechanisms of recording, recontextualizing, and recalling local histories through sound and playful interaction with the audience.

Portraits in Passing, an installation