Journey to the Underworld 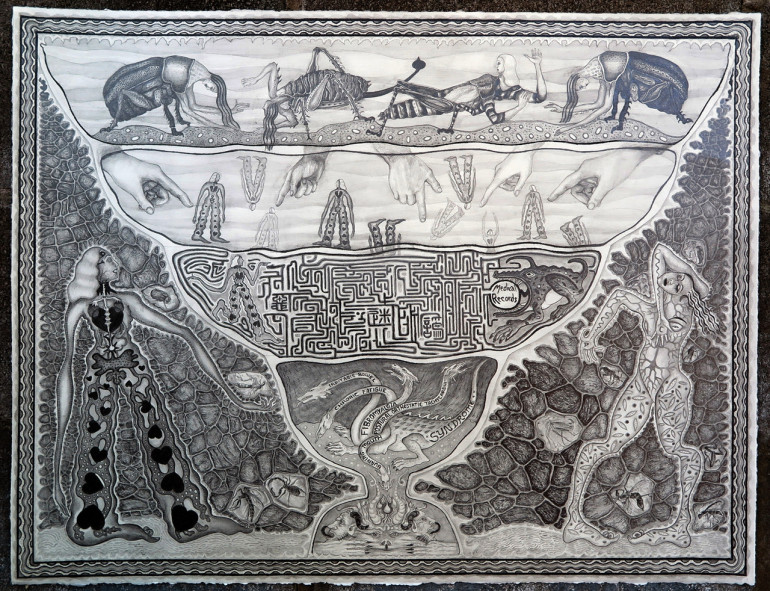 In my picture, “A Map of the Underworld of Invisible Disease,” I patterned the underworld after the multi-tiered goblet shape of Sandro Botticelli’s illustration of Dante’s Inferno. Instead of nine rings, my inferno has just five. The sinners that the inferno is populated with are the damned ill.

?While designing my template for the map of the underworld of invisible disease, I was bothered by the large triangular areas of blank space on either side of the central funnel. For this area, I drew in about five hundred rocks and two standing figures. Allegorically speaking, the fossilized insects in the rocks reflect a past life frozen in time. Years after my initial illness, when I was at last well enough to put domestic life in to some order, I would come across lesson plans and boxes of teaching materials, all neatly arranged for courses and seminars that were not to be. Book manuscripts lay unfinished in their folders like fossils of a former life.

?The figure on the right, my mistress of hyperextension, is autobiographical. I can indeed pull my arm out of my shoulder joint and wrap it around my head. Another consequence of illness was the loss of color vision in my left eye. Because my left eye is dominant, my brain wants to focus out of that one, I can only return almost true colors to my world by closing my left eye, like the figure on the right flank of the drawing, winking to return color to her world.

Janet Kozachek is an internationally trained and exhibited artist. She received her Master of Fine Arts Degree from Parsons School of Design in New York, where she studied with nationally famous artists Larry Rivers, Paul Resika, John Heliker and Leland Bell. Ms. Kozachek also lived, worked and studied in China for five years, including two years of graduate study at the the Central Academy of Fine Art in Beijing (CAFA), where she learned Chinese Writing, Painting and Seal Carving. Janet Kozachek has lived at various times in Europe where she taught, painted and studied ceramics. In addition to her painting, Janet Kozachek is a well-known mosaic artist, and was the Founding President of the Society of American Mosaic Artists. Her work is in the collections of the Morris Museum of Art, The South Carolina State Museum, The Columbia Museum of Art, The I.P. Stanback Museum, The Calhoun County Museum and in numerous private collections.

Janet Kozachek has received a Puffin Foundation Award, National Endowment for the Arts subgrant awards, a Heritage Foundation Award, a Humanities Council Award and a Helena Rubinstein Scholar Award. Her digital records of over 2600 works are part of the archive of the National Museum of Women in the Arts in Washington, DC. She has published several articles, essays, poetry, a book of illustrated rhymes for the cat, “The Book of Marvelous Cats," and her illustrated poetry chapbook, “My Women My Monsters” will be published in 2018.

The Blues: A portrait in two chapters.