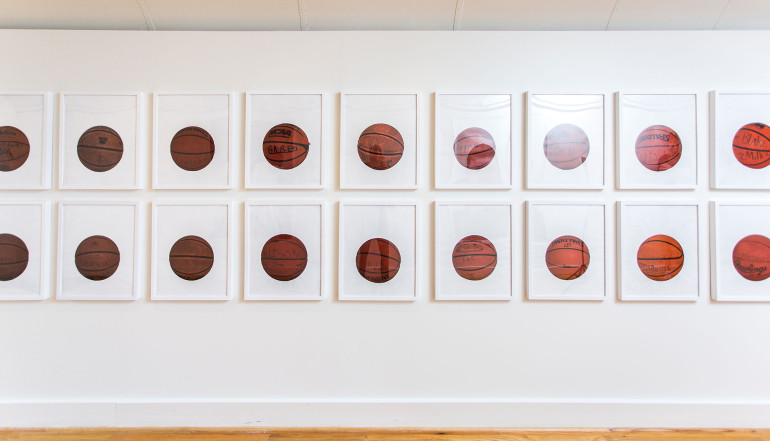 My work has always addressed the interactions between humanity and things. I find this the most straightforward and honest description of my fascinations. These tangible bits of culture are interesting, clever, and fall into systems that structure lives. Coupled with our cognitive needs to classify, our culture has developed into a culture of things. Largely, I find myself asking a few basic questions. What is the history of a thing? What are the interactions between an object and its user/me? And what are the benefits or results of an objects use? These questions, whose intents are broad and inconclusive, provide me a structure for analysis, a way of approaching an all to accustomed environment. Recently, my work has explored boyish masculinity with a focus on "success", "ownership", and "desire". Basketball Collection, is made up of 40 photographs I have taken of found basketballs. Each ball has it's previous owner's name written on it. The work is installed from dark to light.

Thomas Sturgill was born and raised in Pound, Virginia, a rural company town whose heyday had long passed. In 2002, he received his undergraduate degree in sculpture from the University of Tennessee, Knoxville. Sturgill received an MFA in Interdisciplinary Arts from Carnegie Mellon University in 2006. He has exhibited domestically and internationally. He works both solo and collaboratively. Sturgill is a founding member of the artist collective, Pulled Resources. Thomas Sturgill currently lives and works in Nashville, Tennessee and teaching Foundations at Middle Tennessee State University.