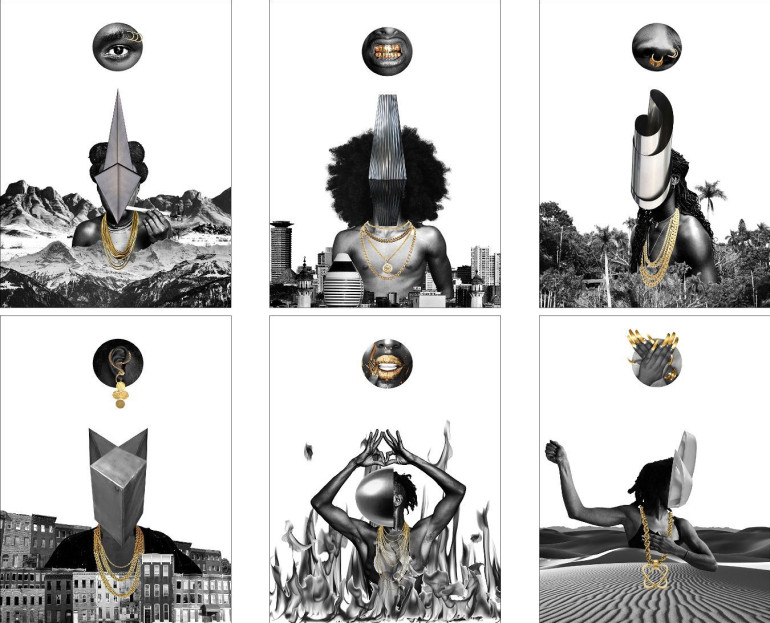 "Future Fortune" is a visual treatise on perspective that invites the viewer to consider the way they perceive the world, themselves, and their fellow humans. With this collection, Dogon Krigga presents a unique elevation of their collage work using vinyl and acrylic. "Future Fortune" also features an interactive oracle that invites the viewer to retrieve a message from the universe based on their random choices.

Dogon Krigga expresses magick with the use of pixel and paper. Known as “the keeper of the crossroads between magick and mixed media”, Dogon incorporates divine mysteries, transcribed over time throughout their ancestors’ experiences to connect Black people to the future and the past. Dogon immortalizes modern and ancient traditions, wisdom, and theory into majestic and whimsical digital and mixed media collages that venerate those that came before, those that will come, and those that exist outside of time. Dogon Krigga uses their experiences, techniques and training of over a decade as a graphic designer and practitioner Afrofuturism, and other African diasporic traditional religions to illuminate the spiritual paths and possibilities for all whom receive their creations.

Dogon Krigga currently resides where they grew up, in Columbia, SC. Their background in creative writing, journalism, and music production also lends to their creative perspective.

Ghost of Christmas Past