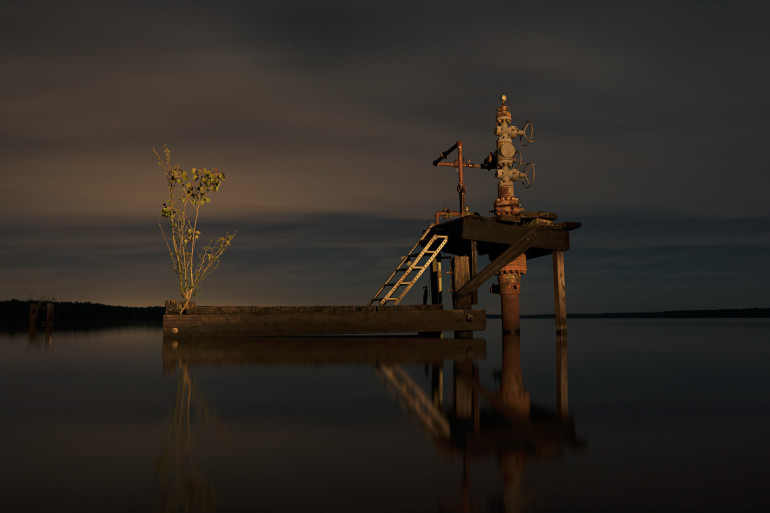 The city was built to harness the water's resources. Not beside the water, but into it: an impossible aspiration. We built houses of wood and bricks, and forts that were obsolete before they could serve their purpose. We built bridges to carry cotton and sugar over land tilled by men and machines. We were rewarded with great wealth. When history and water took it from us, we made laws and levees to keep them compliant - another impossible aspiration. These forces rose again, and we moved down paths into darkened churches. Conversations swirled in empty lots. We were made to learn that the water was not ours to direct.

My work examines our emotional, cultural, and historical attachment to a land that was developed with only short-term human goals in mind. It's a radical ecological meditation on a city created in the space between abundance and annihilation

Frank Relle is a photographer born and based in New Orleans, Louisiana. He graduated from Tulane University with degrees in Cognitive Science and Philosophy. His work is included in the public collections of the Smithsonian Museum of American History, the New Orleans Museum of Art, the Ogden Museum of Southern Art, and the Museum of Fine Arts Houston.

Relle’s photographs have been featured in The New York Times, The New Yorker, National Geographic, The Southern Review and The Oxford American, and he is the recipient of numerous awards, including the 2019 Michael P. Smith Award for Documentary Photography, a 2007 International Photography Award, and was one of the Photolucida Critical Mass Top 50 Photographers in 2006 and 2011.

Through the Looking Glass