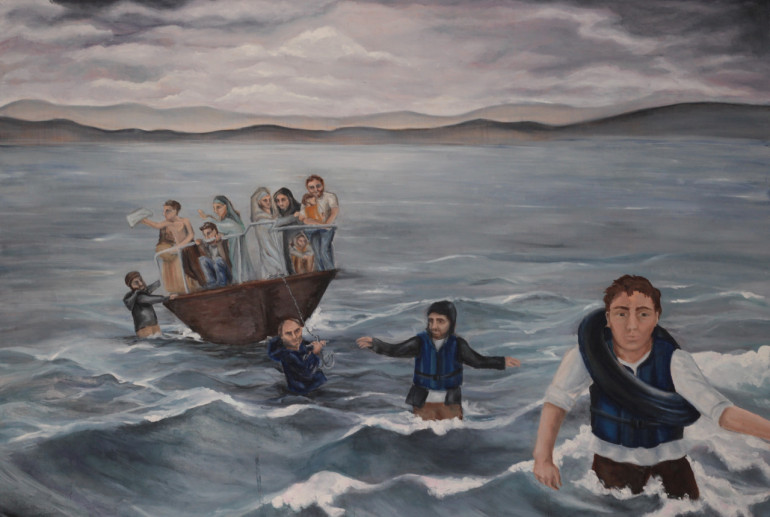 It takes a state of desperation to uproot your life and trade it for an unknown struggle. It takes extreme conditions and a lack of hopeful solutions to bring out the survival instinct to turn and run. Run for your life. The primal movements men made were between fight or flight. When you decide not to fight, whether it is an immediate response or a decision five years into an extremist civil war, it is a powerless flight. You are subject to the quickest conveniences, with few options in high demand. In order to save your life—for example, as militants assault your village—you might first speed away in the family sedan. With some more thought, you may carpool. Or flee in your neighbor’s fruit truck. Aboard a stolen bus. Inside a cart pulled behind a tractor. On a fishing boat, smelling and feeling like sardines. As for the life behind you, you put the last savings into the hands of a stranger. He gives your babies sleeping pills and takes practiced, silent steps across the rocky Syrian border. You play follow the leader in the black of night. What’s the next move? Syria is having the largest refugee crisis since World War Two. But this issue didn't get coined with such a universal name, even though it is a problem that will affect the whole world. The Syrian refugee crisis is a historic tragedy in the making, and has been for years. Their terror is bleeding into neighboring countries like Turkey, Iraq, Lebanon, and Jordan. These neighbors open their doors with arms of humanity, although they don’t have the stable home to support the flood of refugees. Host countries need pecuniary support to run their refugee camps, which provide basic needs and a productive community. With one in four Syrian families led by a woman separated from her husband still in Syria, the camps try and instill female empowerment into a culture that kept women reserved. There are almost 12 million Syrians in motion, not sure where to turn as the cities fill. The United States of America has settled 12 thousand over the five year crisis. Some European cities have taken in twice that-in a matter of one week. Syrians who flee violence for a new life in America assimilate to the culture, a xenophobic culture that prefers to praise apple pie than to celebrate the successful struggles of the migrants and refugees that built our beloved nation. Similar to the initial disappointing “streets paved in gold” dreams, refugees are having trouble finding their dream of a country that prides itself in diversity. Many are discriminated and shocked, those that make it past our border, that is. 30 governors have objected to admitting new refugees in their states. Donald Trump, President-elect, has promised to deport refugees who have already arrived, while increasing surveillance of American mosques and keeping watch lists of certain immigrant groups. These unnecessary actions are taken out of terror, making acts of terrorism successful in spreading the desired fear. It is vital that we turn from terror, as crucial as the Syrians turning from the extremists of their culture. Nothing defeats fear like a face, a human being with a name and a story as long as their journey. A little empathy will soften our hearts away from the hard, unchanging stereotypes and hopefully gather support for our suffering brothers and sisters of Syria.