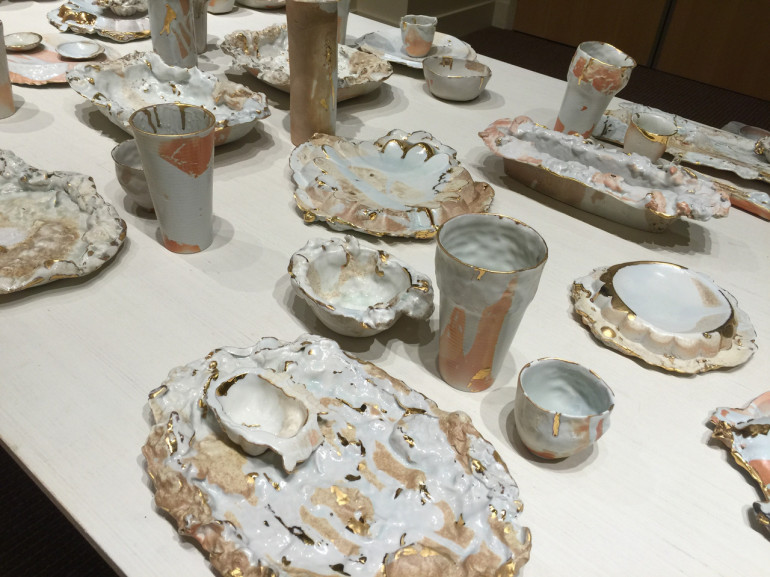 Individual’s thoughts and expectations of handmade objects, perfection, imperfection, and limitations of the hand have fueled my personal research since grad school. Constantly questioning the work I am putting out in the world keeps me growing and learning as a maker and educator. This fun challenging work has abled me to include my students and firing mates. They have aided in parts of the process ranging from messy glazing to the stacking, loading and firing. This has allowed me to loosen up and share ownership over all of the ceramic processes. It is exciting to see my students spill, splatter, fling and drip glazes haphazardly over the wares and have them help me prepare and load the work into the kiln. Every step of the process and the hands that touch each piece affect the outcome of the final product. There is a residue of the mark of the maker(s) and hints and highlights intended perfect imperfections and/or gifts from the firing process. Embracing what David Pye calls “the workmanship of risk. Workmanship using any kind of technique or apparatus, in which the quality of the result is not predetermined, but depends on the judgment, dexterity and care which the maker exercises as he works.” (The Nature and Art of Workmanship, p. 20). This project has been a learning curve of new techniques and processes, which were necessary for me to master as we wood fire regularly at WCU.

Erickson earned her BFA at the University of the Arts and her MFA at Cranbrook Academy of Art. She later was a summer resident at the Archie Bray and was also awarded a Fulbright to study at Aalto University in Helsinki, Finland from 2004-2005. Afterwards, she became a resident artist at the Clay Studio, and taught at the University of the Arts, Rowan University, and Arcadia University. She has earned numerous awards, including first place for the Horizon Award presented by the Museum of Art and Design in New York and honorable mentions at the Korea Biennale International 2007 & 2009 Exhibitions. She was awarded an Independence Fellowship for a summer 2009 residency at the International Ceramic Research Center in Denmark. She was the 2009-2012 Robert Chapman Turner Teaching Fellow in Ceramic Art at Alfred University. In 2012, she moved to Colorado where she taught at Rocky Mountain College of Art and Design, Red Rocks Community College, Colorado Mountain College-Aspen Campus and Arapahoe Community College. The following year she was a visiting teaching artist/sabbatical replacement for the 2013-14 academic year at CU Boulder. Heather Mae is the newly-appointed assistant professor and Ceramics Coordinator at Western Carolina University in Cullowhee and now resides in Sylva, North Carolina.

Nothing Stays the Same VII