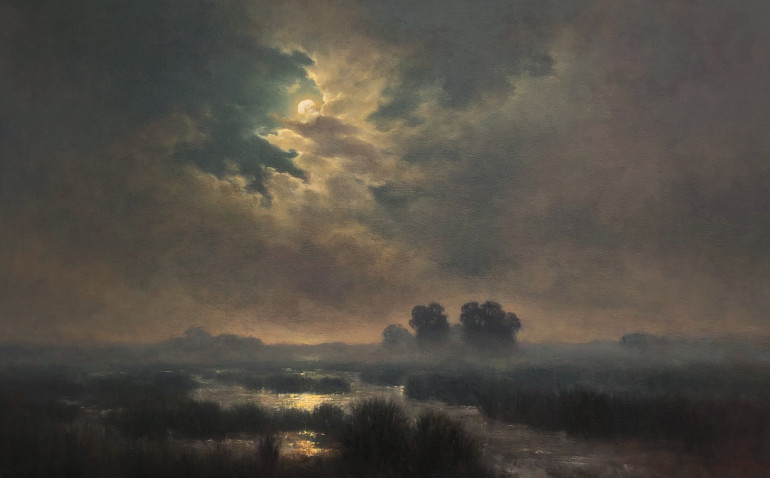 I am often drawn to images of the night, a time when the suggestive takes precedence over the readily explained. The title "Held" is intended to be open-ended. It might suggest the moon being held aloft by the clouds, the holding of one's breath while gazing at the moon, or perhaps the attention of the viewer being held by the scene before them.

Gerard Erley has had over four dozen solo exhibits throughout the United States and has exhibited in over 300 juried shows. He has won over a hundred awards at the regional and national levels. The artistâs work has hung in museums and galleries from New York to California, and can be found in museum, corporate and private collections both in the United States and abroad. Gerard has won Best of Show at the South Carolina State Fair Professional Exhibition and received multiple grants from the South Carolina Arts Commission. He won top prize at the ArtFields portrait painting competition in 2019.

Erley is known for his imaginary landscapes in oil paint on canvas or panel. He rarely refers to photos or sketches, preferring to paint in the studio from memory and intuition. The artist is influenced by such 19th-century American and European painters as Inness, Corot, and Turner. Like them, he seeks a sublime quality of light in his romantic landscapes.